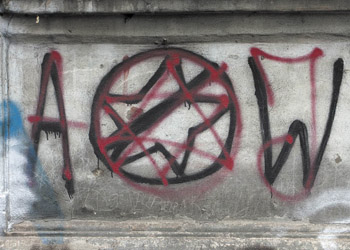 Krakow has become the first city in Poland to launch a major campaign against graffiti – with a focus on racist slogans.

The campaign is being co-ordinated by the organisation Interkulturalni PL. The group, which promotes multi-culturalism, will include a ‘street of shame’ gallery on its website to display some of the worst daubs on the city’s walls.

Krakow city council already spends around 150,000 zł a year, removing graffiti. However, it has for the first time joined forces with Interkulturalni to develop a joined up anti-racism strategy. Part of the strategy is intelligence-led, gathering information about graffiti hot-spots, the owners of buildings and the ‘tags’ that are sprayed on walls.

Radoslaw Gądek, deputy commander of the Krakow City Guard, said police would work closely with the council and with Interkulturalni. He told the newspaper Gazeta Wyborcza that the information gathered and collated would help to create a ‘portrait of graffiti’ in the city, which would in turn help to identify the vandals behind it and to uncover their motives. Krakow would also seek advice from other cities, to learn how they have dealt with similar problems.

Members of the public can get involved in the campaign by using a form on the website www.ekocentrum.krakow.pl to report graffiti. Michał Pyclik, spokesman for Krakow’s Department of Public Utilities, Transport and Infrastructure (ZIKiT), said the team would respond quickly to reports made via the website.

Mr Pyclik added: “Slogans that are particularly vulgar, insulting to religious feeling or threatening to ethnic groups will be removed immediately. The rest will be removed afterwards, because our financial capabilities are limited.”

While the removal of racist graffiti may be seen as a high-visibility, front-line action, the city, Interkulturalni and their partners have promised that the anti-racism strategy will run much deeper. Part of this strategy is the new website www.open-krakow.pl. Here, anyone affected by racism – whether as victims or witnesses – can file anonymous reports about their experiences. Just as with the graffiti arm of the campaign, the aim of the site is to gather information and develop a profile of racism in Krakow.

Interkulturalni’s Adam Bulandra said the key to success was educating the public, and he told Gazeta Wyborcza that the perpetrators of racist acts may not be aware that they were committing criminal offences that carried severe penalties.

Mr Bulandra added: “The fight against racism relies on educating the public from scratch, and on putting across the same message over and over again. Consistency is important.”

2 thoughts on “Writing on the Wall for Racist Graffiti”