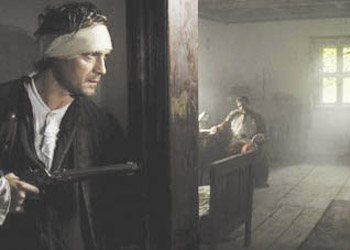 Polish producers have continued to rely on a pool of young actors often nurtured in the country’s theatre schools. Given the current plethora of talent this source has provided, the movie industry has not been in need – and it has provided Polish cinema with its leading heroine. Roma Gąsiorowska came up through the ranks by working on some of the best movies of the past decade, including Xawery Żuławski’s Wojna Polsko-Ruska (Snow White and Russian Red) (2009) and Paweł Borowski’s Zero (2010). Although Roma once expressed her admiration for the work of the Polish-born British cineaste Paweł Pawlikowski, there is no immediate suggestion that she is set to take her chances abroad. This will depend on the quality of roles she is offered at home. Documentary filmmaker Dawid Leszek has set a good example in his first feature film by tailoring a movie entirely around her. Kinga ‘Ki’ is an anti-heroic, young ‘mother courage’ who is struggling to put together the pieces of puzzle that she can never quite put out of her mind. The Dardennesque camera of Leszek dynamically follows Ki’s existential path, which can be seen as: “a verification of human relationships in the contemporary world,” according to the director. Ki left Venice Days with very positive reviews. This is how Polish cinema can boost its reputation abroad without endlessly playing the Skolimowski and Wajda cards.

An increasing number of young Polish filmmakers have recently been rewarded for their patient work in the form of support from the Polish Film Institute. Adrian Panek is an example. He was given the chance to direct a costume drama that, unusually, he wrote from scratch rather than adapting from an historical literary work. Panek was able to leverage the positive feedback he received for his short film Moja Biedna Głowa (My Poor Head) (2009), a family drama with the brusque appeal of Slawomir Fabicki’s films. He has also benefited from mentoring by the authoritative director Filip Bajon. It was Bajon who encouraged Panek to pursue an idea he had been toying with since his college days. Dass is based around the story of the self-proclaimed, 18th-century Jewish messiah Jakob Frank (Olgierd Łukaszewicz) following his exile to Vienna. In fact, Frank makes few appearances in the movie, which instead focuses on the lives of Jakub Goliński (Andrzej Chyra), a government official and former member of the Frankist sect, and his superior Henryk Klein (Mariusz Bonaszewski) who was responsible for the conviction of the influential kabbalist. As a costume drama, Dass is in a class of its own by not being derived from literary sources, but this is not enough to make it worthy of wide distribution abroad. Arkadiusz Tomak’s cinematography is noteworthy for the way it isolates and picks bewigged figures out of the dark without any redundant decoration.

Ask any Pole to name the most underrated filmmaker of the People’s Republic of Poland and most will probably bring up Stanisław Bareja. Even though Krzysztof Zanussi once unsuccessfully attempted to co-opt Bareja into his film unit, the prince of Polish comedy was largely unappreciated by the highbrow and the party-aligned film critics and producers of the time. His supposedly plebeian tastes led his detractors to coin the pejorative term ‘Barejzm,’ which, as is often the way with pejorative terms, later took on a positive tone in reference to Bareja’s crackerjack anti-intellectualism. Miś benefited hugely from the caliber of the comedian Stanisław Tym, who also contributed to the brilliant script. Tym takes the role of Ryszard ‘Miś’ Ochódzki, an unscrupulous sausage fan and manager of a fictitious sports club who is obsessed with keeping his greedy wife away from their joint bank account in London. Bareja’s characters are all two-faced chancers ready to sell their mothers for a bunch of Christmas pines and frankfurters but, as cynical as this sounds, Bareja proved to be perfectly in tune with a Polish audience that was acutely aware of its status as a pawn in the hands of the red big brother. The titanic teddy bear of straw featured in the film can be seen as a symbol of Poland at the time, as well as a perishable monument to human stupidity. The wider international distribution of Bareja’s entire oeuvre is greatly deserved.