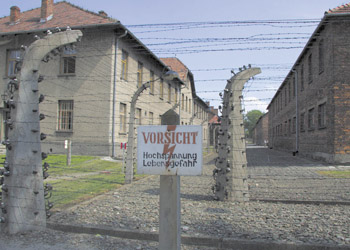 Around 500 Auschwitz survivors are to be interviewed after the Polish government re-opened an investigation into the atrocities committed there during World War II in the search for potential war criminals.

The Krakow branch of the Institute of National Remembrance in Poland (Instytut Pamięci Narodowej, IPN), which investigates both Nazi and Communist crimes, announced the new probe at the end of October. The aim will be to ascertain whether any former Auschwitz staff are still alive, and if so, whether to pursue legal action against them.

The news agency Associated Press reports that the new investigation had been prompted by the successful trial and conviction of a Nazi war criminal living in the United States. John Demjanjuk was prosecuted in Germany earlier this year, and found guilty of more than 28,000 counts of accessory to murder. The case was unique, because Germany had never before prosecuted a camp guard on the assumption that by working at a Nazi camp during World War II, they shared culpability for the murders that took place there.

Efraim Zuroff, a Nazi hunter working with the Simon Wiesenthal Center, told AP that he welcomed the news of the new investigation. But, he also said that the results were not a foregone conclusion.

Although trials of Auschwitz staff were officially halted in 1956, following an international amnesty, the new programme is actually a continuation of another investigation begun under the Communist regime in Poland but shelved with the collapse of the Iron Curtain. An individual prosecution was last brought in Poland in 2001, when Henryk Mania was jailed for eight years for his role in genocide at Chelmno.

Piotr Piatek, of Krakow IPN, confirmed that new cases could be brought to court. He told the Polish Press Agency: “We cannot exclude the possibility that someone from the staff of Auschwitz-Birkenau is still alive, in which case, he would be responsible for crimes against the state.”

Polish Radio reports that the investigation will delve into the daily organisation of camp life. The IPN also hopes to reach a final figure for the number of people who died at Auschwitz.

The announcement of the investigation marks the anniversary of Auschwitz becoming a fully-operational death camp, in October 1941. A new book looking at the Holocaust, also published to mark the anniversary, claims that there was effectively a ‘Europe-wide’ collaboration with the Nazis.

Professor Dan Stone’s book Histories of the Holocaust, published by Oxford University Press, draws on research from across Europe, to paint a picture of the Holocaust as a ‘European project.’

Prof. Stone, who works at the Royal Holloway, University of London and heads the UK’s Holocaust Research Centre, pointed out the ‘systematic, state-level collaboration’ in France, Norway and the Netherlands. He wrote: “It has become clear that the murder of the Jews in Eastern Europe would have been much harder for the Germans to carry out were it not for the assistance of the local inhabitants throughout Europe. And, the same is true in Western Europe.”

One thought on “Nazi Hunt Launched in Poland”