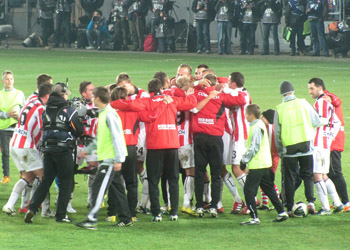 For now, Krakow belongs to the men in stripes. Cracovia stunned neighbouring Wisła 1–0 on Sunday to win the 184th edition of the Holy War. Dutch striker Koen van der Biezen picked the perfect time to register his first goal for the Pasy when he headed in a free kick from Saidi Ntibazonkiza in the first half. Van der Biezen was a surprise choice to start the match, but Dariusz Pasieka’s decision paid dividends in what is certainly the greatest win of his managerial career.

On the other side, Robert Maaskant coached his last game from the Wisła bench. The championship-winning manager was sacked by the club on Monday after a string of disappointing results, with this derby loss the most bitter among them.

Cracovia had appeared ailing for most of their 12 previous matches and Wisła had limped back to Krakow after sustaining a 4–1 defeat against Fulham three nights earlier in the Europa League. The White Star arrived without the services of injured forward Maor Melikson, who scored the only goal in the derby last spring. With Cracovia languishing in the cellar of the league table, Wisła and their opulent line-up were still clear favourites to win the intra-city clash once again.

Ntibazonkiza nearly gave Cracovia a lead in the fourth minute when he found the ball in traffic at the top of the box and took a shot, only to see the it deflect off the fingertips of goalkeeper Sergei Pareiko and go wide. Wisła attacker David Biton then had two optimal chances to draw first blood in the early going, but both times Cracovia’s Wojciech Kaczmarek was in the perfect position to deny him. The two sides continued to battle evenly until Van der Biezen broke the deadlock with his phenomenal header in the 37th minute.

Controversy ensued early in the second half when Wisła’s Ivica Iliev fell after colliding with Łukasz Nowoczyński inside the box. Wisła begged the referee for a penalty kick, but their pleas fell on deaf ears. The moment of the half came ten minutes later when, amid chaos, Iliev fired the ball past Kaczmarek, then watched as Cracovia’s Sławomir Szeliga miraculously stepped in to divert it out of play. Wisła dominated possession and had several more chances to score later on, but all of their shots either veered wide or were turned away by Kaczmarek.

The visitors’ frustrations nearly escalated into a brawl between the two teams when Szeliga fell to the pitch, apparently feigning injury, as precious seconds ticked by. After a lengthy delay, the referee added six minutes of stoppage time, which saw each side threaten until the final whistle, concluding Cracovia’s first home victory against Wisła in their new stadium.
Pasieka was jubilant: “We showed that we are a team that wants and knows how to win. We also killed two birds with one stone: we won the derby and we have gained three extremely important points.”

His counterpart at Wisła, Robert Maaskant, was in disbelief after what turned out to be his final match as the team’s manager: “We created a lot of chances to score goals and we should have got at least two or three goals, but this was not done. We lost, which was unacceptable for us today.”

But for supporters of both teams, the Holy War is all that matters. After Wisła dominated for years, the two sides have split the last five meetings with a 2–1–2 record. Cracovia gets to enjoy bragging rights in the series until the teams meet again next April.