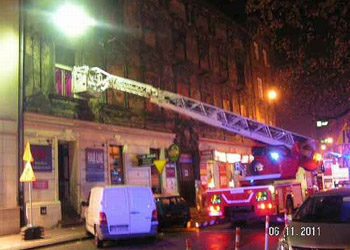 Eleven people were injured and 2,000 evacuated when the stairs collapsed at a busy Krakow night spot.

The accident happened at about 2.30am on November 6, at ul. Wielopole 15, where the concrete stairs between the second and third floors gave way. The building is home to four popular clubs, and was packed with locals and tourists.

The injured revelers were standing on the stairs at the time. They were taken to several hospitals in Krakow, but police said their injuries were not thought to be life-threatening. Firefighters evacuated the building, and an investigation into the cause of the accident was launched.

Initial surveys suggest that the building was in poor condition, and that the stairs were overloaded, according to the newspaper Gazeta Krakowska. Further investigations will continue, and it is not known when the building will reopen.