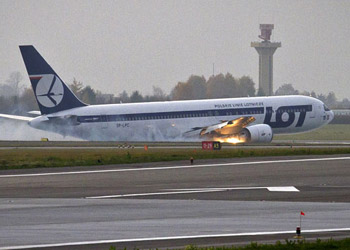 A LOT Polish Airlines Boeing 767 has made a dramatic emergency landing at Warsaw Chopin Airport after its landing gear failed to deploy.
All 231 passengers and crew were evacuated without injury after the pilot executed a faultless emergency touchdown.
Live television pictures showed the plane shedding sparks as its belly scrapped along the airport’s 3.7 km long runway 33.
Emergency slides were deployed within seconds of the aircraft coming to a halt and passengers began streaming way from the stricken Boeing.
Fire crews arrived immediately and began doused the airframe in fire-suppressing foam, but there were no flames.
Flight number LO16 was approaching Warsaw at the end of an eight-hour flight from Newark Liberty International Airport when the captain reported a problem and aborted the landing.
The Polish air force received news of the emergency at approximately 13:40 and scrambled two F16 fighter jets to make a visual inspection of the LOT Boeing.
Once it has been confirmed that the landing gear had not deployed, the remaining fuel on board was dumped before a landing attempt was made.
Due to land at 13:35, flight LO16 touched the tarmac at 14:48, local time.
The airport is closed to all air traffic and is expected to remain closed until sometime tomorrow.
In December 1993 another LOT Boeing 767 suffered substantial damage when its nose gear collapsed on landing at Warsaw. There were no casualties, and this was the last significant air accident at the airport before today’s emergency.
In September 1993 the co-pilot and one passenger onboard a Lufthansa A320 landing at Warsaw were killed when their aircraft overran the runway in difficult wind conditions.
The last catastrophic accident at the airport, then called Okecie International, occurred in 1987 when a LOT flight bound for New York turned around after an engine failure and crashed short of the runway. All 183 passengers and crew perished.