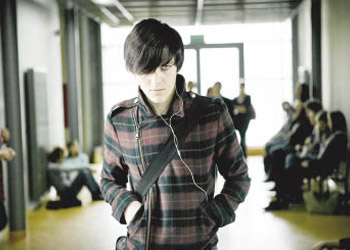 After an eleven-year break from the big screen Barbara Sass has put aside her activity as a stage director and returned to movie making. Sass took an interest in the Kazimierz Dolny nunnery affair when a baby was discovered in the bunker-like convent after its occupants were evicted in 2007. Despite a nation-wide scandal, investigations led nowhere, and Sass herself admits that her reconstruction of events is far from certain. She opted to push forward her project by writing a screenplay based loosely on known events. The vaguely Sapphic film poster, showing an ambiguous manifestation of affection between the abbess (Anna Radwan) and doubting nun Anna (Katarzyna Zawadzka, who won a Golden Lion in Gdynia) hints strongly that this film was intended to be a succès de scandale. The daily routine of the nunnery is disrupted by the arrival of Father Franciszek (Mariusz Bonaszewski), who aims to evict Satan using decidedly unconventional methods. Neurologist Laura Bossi wrote that we live in an age when the word ‘Devil’ has almost disappeared from the vocabulary of the church. In W Imieniu Diabła, Satan is incessantly and awkwardly evoked. The film does not display a scrap of authentic spirituality, nor a grain of the
self-conscious irony of the post-modern horror genre.

Only time will tell whether talented, 30-year-old cineaste Jan Komasa is really the prodigy he seems to be. In the meantime, the feeling is that the entire nation is betting on his talent. His new film, about the Warsaw Uprising and using the working title The City, has the personal blessing of Polish premier Donald Tusk and the Polish Film Institute has granted 1.5 million euros for its production. Sala Samobójców is not an ode to emo culture aimed at teenagers, but rather a dark tale about addiction to virtual words. Komasa has succeeded in reaching more mature audiences by portraying the self-inflicted isolation of central character Dominik (Jakub Gierszal), an 18-year-old whose wealthy parents pay him little attention. Dominik evades reality by turning to the ‘suicide room’ – a virtual community of potential suicides who adopt Anime-style avatars. Sylwia, aka The Princess, (Roma Gąsiorowska) convinces him to join the group. In the same way that Gus Van Sant did in Elephant (2003), Komasa has understood that the self-destructive cruelty of youth can be fully evoked on screen simply by using a hand-held camera in the hallways of a college. With more than 20 minutes of highly polished computer-generated animation, Dominik’s polygonal journey into a virtual world represents a crucial step for Polish cinema into a territory thus far unexplored by its filmmakers. Having Denmark-based distribution agent LevelK onboard will hopefully guarantee global circulation.

“Everybody is culpable, especially those individuals who were in government during the Second Word War,” said Władysław Pasikowski in a recent interview about the making of a new feature dealing with the infamous Jedwabne pogrom. It’s a sentiment strongly implied in the director’s classic cop movie Psy, where good is not distinct from evil. The abolition of hated state institutions such as the Milicja Obywatelska (Citizens Militia) and the Służba Bezpieczeństwa (Security Service – the secret police) in the early 1990s led to the exclusion of many Poles from the new machinery of the state. Psy is a merciless portrait of a group of former SB agents who are willing to do anything in order to regain their former status. The samurai-like Lieutenant Franz Maurer (stunningly played by Bogusław Linda), recruited to the new Polish police force, is one of the inglorious ‘psy’ chasing down former colleagues who have sold out their already dubious integrity to smuggle amphetamines into Western Europe. The film’s title, Psy (dogs), is the Polish equivalent of the porcine English-language slang word for police. The liberal use of swearing and the appalling torture scenes almost immediately made Psy a local succès de scandale. Despite these elements, its grandeur is to be found in the existentialist and Melvillesque tone that permeates Maurer’s walk on the wild side. It’s worth remembering that Psy was released before world cinema had yet been exposed to Tarantino-mania.