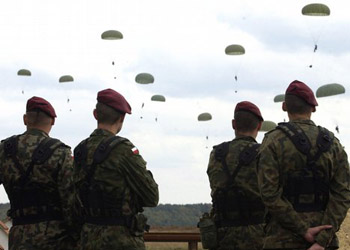 Soldiers and officers from Krakow’s parachute regiment are fighting allegations of corruption and ‘lewd behaviour,’ after five of their members were arrested in connection with an investigation by the Military Prosecutor’s Office in Warsaw.

The troops from the 6th Airborne Brigade are said to have given military training to civilians and pocketed the fees, and falsified documents to get higher pay by claiming a larger number of jumps than they had actually completed. Neither the Prosecutor nor the Military Police have specified the nature of the alleged lewd act.

But the Red Berets deny all the claims, saying that the allegations are ‘unfounded’ and absurd. They want the soldiers’ names cleared, and objected to their being taken into custody in handcuffs.

Commercial parachute training and jumps in return for cash are said to have taken place over the past two years. Warsaw has drafted in the Krakow branch of the Military Police to help with this investigation. Prosecutors in the capital are also interviewing witnesses in connection with falsified jump records and have so far spoken to 300 people. Col. Dariusz Knapczyński, head of the investigation, said preliminary work on the case could last until the end of October.

Captain Artur Gosiewski, of the 6th Airborne Brigade, said the allegations were unfounded. Another former Red Beret, Brigadier Jerzy Wojcik, said the Military Prosecutor’s office had made the case public because it had not made sufficient progress with the investigation.