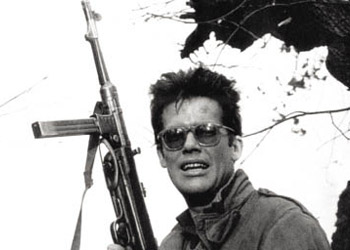 Polish cineaste Janusz Morgenstern passed away early in the morning of September 6 in Warsaw. ‘Kuba,’ as he was fondly known in Polish movie-making circles, was part of the acclaimed line-up behind the prosperity of the Polish Film School in the late 1950s. He died aged 89 in hospital.

Morgenstern was head of the production unit Perspektywa for many years and went on to tailor notable films such as Europa Europa (1990) directed by Agnieszka Holland, which was nominated for an Academy Award for Best Adapted Screenplay. He was also involved in Zemsta (The Revenge) (2002), a Galician costume comedy directed by his close friend Andrzej Wajda.

More recently he produced Feliks Falk’s drama Komornik (The Collector) (2005), which introduced the talent of Andrzej Chyra in the perfidious role of a debt scavenger. Even after directing his last feature, Mniejsze Zło (The Lesser Evil) (2009), he refused to retire.

In the 1960s and 70s Morgenstern directed episodes of the highly popular TV dramas Stawka Większa Niż Życie (More Than Life at Stake) and Kolumbowie, both set in the milieu of the Polish resistance movement of World War II. They can be seen as a moral victory against zealous Soviet censors who refused to green-light the production of an epic picture about the Warsaw Ghetto Uprising that Morgenstern dreamed of bringing to the big screen.

Morgenstern took an unusually creative role as second-unit director in the war trilogy directed by Wajda. It was Kuba who eventually convinced Wajda to cast the legendary Polish actor Zbigniew Cybulski as Maciek Chelmicki, the sunglass-wearing resistance fighter with a good cause, in Popiół i Diament (Ashes and Diamonds) (1958).

Morgenstern worked with Cybulski again in Do Widzenia, do Jutra (Good Bye, Until Tomorrow) (1960), which examined the loss of innocence among a group of underground performers in a Rossellini-esque portrait of Gdansk. Morgenstern’s directorial debut was inspired by the activity of the Bim-Bom theatre group in the same Baltic town where Cybulski and Bogumił Kobiela learned their craft.

Jowita (1967), which has recently been restored, won Morgenstern the San Sebastian Film Festival Prize for Best Director. Banal incidents ended the lives of Cybulski and Kobiela in the late 1960s, but Kuba went on to direct another hidden pièce de résistance, which this time launched the cinematic career of Jadwiga Jankowska-Cieślak – Trzeba Zabić tę Miłość (We Must Kill This Love) (1972).

Time has proven that Morgenstern was not wrong in considering Trzeba Zabić tę Miłość his best film. A cruel love story spliced together with disturbing still frames and ending, literally, with a bang showed what the Polish New Wave could have become.

Morgenstern literally brought fire to some of the finest moments of Polish cinema. By deciding to ignite the the vodka shots in Popiół i Diament and illuminating the monologue in Do Widzenia, do Jutra with two cigarettes, he proved himself Poland’s cinematic Prometheus.