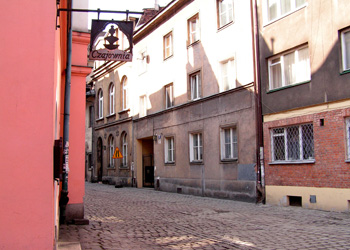 Up to 300 people and 12 commercial tenants face eviction from three buildings in Kazimierz, because they are earmarked for conversion into an exclusive hotel and conference centre.

Residents of Krakow’s historic Jewish district have rallied to support those facing the loss of their homes and businesses, and have launched an online petition to prevent the evictions taking place. They have also protested in the street and held a public Mass to bring attention to the campaign. They say the plans are further evidence of the ‘gentrification’ of Krakow, and especially of Kazimierz – where residents are being swept from their homes to make way for lucrative new accommodation and services for tourists.

The buildings at the centre of the argument are at ul. Józefa 9 and 11, and ul. Bożego Ciała 24. They are owned by the Lateran Congregation of Canons, which has been trustee of the church of Corpus Christi Church at ul. Bożego Ciała 26, since 1405. The buildings have been leased to the development firm De Silva Haus, based in the Opole region. It is understood that the Laterans can no longer afford the upkeep of the buildings, which are in poor condition, so sought an outside company to carry out repairs and renovation.

Anna Stępniewska-Jankowska, lawyer for De Silva Haus, confirmed that the buildings would be converted into a hotel. Speaking in an interview with the newspaper Dziennik Polski, Ms Stępniewska-Jankowska added: “Adaptation work will begin when the residents leave the building. The company will offer them alternative premises. All work will be carried out in accordance with the guidelines of conservation authorities. The buildings will be turned into a hotel, but the premises on the ground floor can still perform useful functions.”

However, residents and campaigners fear the plans would tear the heart out of one of Kazimierz’s most characterful streets. And they have warned that much-loved Krakow institutions such as the Naïve Art Gallery, Art Factory, the Bill Hickman and the bar Eszeweria are all under threat. They say that increased rents for residents have made it impossible for them to stay in their homes, and have appealed to Krakow’s city council to stop the development. If the city does not intervene, only the Vatican can order the Laterans to halt the scheme.

The Mass and protest on September 18 drew support from Kazimierz and beyond. There were speeches and film screenings, followed by a carnival with stilt walkers and fire dancers. The protest continues online, with a petition posted at ulicajozefa.pl. Supporters can also sign up at ul. Józefa C-10.