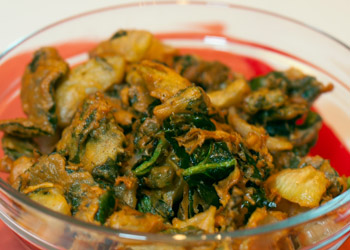 Konrad Job is a young man with a big dream: to bring quality Indian food to Krakow, but with a twist. His secret weapon is the roti – the unleavened bread ubiquitous to South Asian cuisine.

Konrad’s new cafe, called RotiRoti, serves freshly-baked roti wraps containing a variety of authentic South Asian fillings. At just 10 złoty each, they make a tasty and filling alternative to the kebabs and stuffed pancakes Cracovians are already familiar with.

“Most Poles are unfamiliar with Indian food,” said Konrad, “If they go into an Indian restaurant, they have no idea what to expect or what to try. Our idea is to make Indian food more approachable by serving it in a form that’s immediately recognisable.”

The food at RotiRoti is not only approachable, it’s actually much more authentic than the standard, sit-down Indian restaurant format. “It’s Indian street food,” Konrad pointed out, “This is how millions of Indians and Pakistanis eat every day – on the street, on the go, using the traditional bread and their fingers rather than knives, forks and plates.” And Konrad should know – he grew up in Pakistan before returning to his home city of Krakow via several years in London.

Roti wraps are not the only thing on the menu. We spoke to Konrad over a bowlful of completely irresistible pakora. As a way of introducing their food to the city, RotiRoti has a programme of “guerrilla marketing,” which involves pouncing on people in the street and forcing bags of freshly fried pakora or bhajis on them. Given how addictive these are, we can only hope they don’t fall foul of controlled substance laws before everybody gets to try.

To wash it all down we tried two other South Asian staples – Masala Chai and Lassi. Masala Chai is a spiced, milky tea consumed all over India and Pakistan. It’s another classic street food and, according to legend, the source of the strange British habit of adding milk and sugar to their tea that so horrifies most other Europeans.

“Masala Chai has been a big hit with Cracovians,” said Konrad, “Even the builders renovating the cafe before it opened – straightforward Polish working men – loved it.”

The chai, like the roti, the pakora and everything else on the menu, is made according to real Indian recipes. An Indian lady, who now lives in Krakow, presides over the kitchen and guarantees the authenticity of everything it produces.

“We import all of our specialist ingredients,” insists Konrad, “the spices, the atta flour for the roti, everything.” He places great importance on the authenticity of his food – in fact he probably used the word ‘authentic’ 50 times in our conversation. It’s a commitment that shows in the quality of the food, which manages to be simultaneously straightforward and novel.

RotiRoti is still finding its feet, but it undoubtedly has a good product and an owner bursting with energy and ideas. It will be interesting to see what direction RotiRoti takes, and we suggest the best place to observe this will be from one of its tables behind a mountain of lip-smacking pakora.