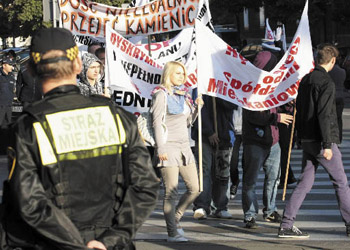 A tenants’ support group in Krakow has vowed to stop traffic every day for a week until the city agrees to ban evictions of vulnerable residents of social housing.

So far, the Tenants’ Defence Forum has taken to the streets at Starowiślna, Karmelicka, Krupnicza, Basztowa, al. Słowackiego and Łokietka. They have also taken their protest to the city centre, displaying banners on the Rynek Główny.

The protests have caused delays for motorists and tram passengers, but Graniwid Sikorski, leader of the tenants’ group, said that right was on their side. He warned that city housing policy relating to leases for city-owned social housing must protect older and less well-off tenants from eviction.

Speaking to the newspaper Gazeta Wyborcza, Mr Sikorski added: “This protest is our only form of defence. We do not fear the reaction of residents. Right is on our side. We will not give up until we reach our goal. I wonder whether or not to carry out three demonstrations at the same time, to completely paralyse the city.”

Police and the authorities in Krakow, however, have vowed to do all they can to keep traffic moving.

A demonstration on ul. Starowiślna on September 22 caused major disruption to road and tram traffic, but police prevented marchers from blocking al. Słowackiego during the morning rush hour the following day. Officers allowed about 50 people carrying banners onto the road only when traffic had already been halted by traffic lights.

Adam Młot, head of the city’s major events unit, said: “We will still try to communicate with the demonstrators and to establish some principles of co-operation so that there is no paralysis of public transport. This is always the best solution.”

Mr Młot warned that it was a violation of traffic law to ignore an order of a police officer, but that the situation was more difficult because the right to free assembly is also enshrined in the Polish Constitution.