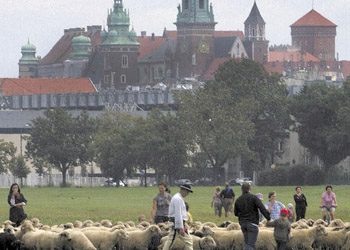 A hundred and fifty sheep have been grazing Błonia meadow for several weeks now. They are supposed to be there to promote traditional Malopołska culture, but some are saying the wool is being pulled over Cracovians’ eyes.

Błonia has hosted many important events in the past, including martial anniversaries and papal visits, but this is a first.

Jacek Soska, a candidate for the Polish Peasants’ Party (PSL) in this month’s parliamentary election, has convinced Krakow officials to lease Błonia to him for two months for the sum of 3,200 zł. His idea is to use the 48-hectare space to promote the traditional culture of Polish highlanders and the entire Malopołska region – including sheep husbandry.

Many Cracovians scoffed at the idea of flocks grazing in the city centre and never expected it to happen, but the animals arrived on Błonia at the beginning of September and have been there ever since.

Cracovians have been split by the initiative. “Pasturing sheep in Błonia is a scandal – has anyone thought about the children who play here? Sheep can graze in more suitable places than a city centre,” said Tomasz, a passerby on Błonia.

Indignation rose to new heights when Polish daily Gazeta Wyborcza revealed that Mr Soska had applied for up to 17,000 zł of EU agricultural subsidies on the grounds that he is using the land for pasture.

The application is now being processed. “We will check if the applicant has all the required paperwork and if the area is really a farming area or a recreation one,” said Grzegorz Tomsia, head of the Olkusz branch of the Farming Restructuring and Modernization Agency, adding that if all conditions are fulfilled, the Agency will pay the subsidy at the end of the year.

“I wanted to showcase a dying tradition and point out that there is more and more wasteland in Poland. In what was once a farming country, fewer people want to farm the land every year. I would really like to convince the Krakow authorities to have animals on Błonia every year rather than paying to have it mowed, hence my application for a subsidy,” said Mr Soska, explaining his intentions.

Krakow officials claim to have been surprised by Mr Soska’s actions, insisting that Błonia is a public green space maintained by the city and, therefore, not eligible for subsidies.

“This has gone too far. This looks to me like an election campaign for PSL in Krakow,” said Kazimierz Czekaj, a local candidate for rival party Platforma Obywatelska (PO).

The sheep are being tended by shepherds, called ‘baca,’ who sleep in a traditional hut that has been erected on Błonia, and make traditional sheep’s milk products, such as oscypek (smoked cheese).

The flock is confined to an area of about six acres for a few days before being moved on to another part of the green. The whole operation has passed examinations by hygiene inspectors and animal welfare organisations.

At the end of pasturage in late October, the sheep will be moved on. “Natural manure can help this meadow – you’ll see what beautiful grass you will have here next year,” said shepherd Kazimierz Furczoń.