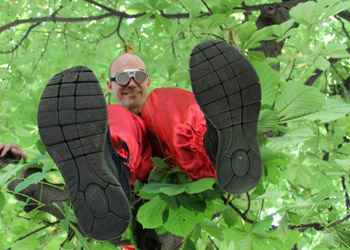 If you’ve recently spotted a man in a tree and thought ‘what..?’, then Chris Gray has got your attention in just the way he intended.
American Chris has been climbing a different tree every day for a year, to highlight environmental issues in Krakow. He said that the city’s trees – vital for improving air quality and shade, and for cooling the long, hot summer days – were being cut down at an alarming rate.
The daily climbs in fact began life two years ago, as an art project by Cecylia Malik. She too climbed one tree each day, recording her progress with a series of unusual photographs. When Chris took over the focus turned from art to conservation, and since September last year he has found a way up among the branches in all weather.
The conservation group POE Małopolska is also supporting the campaign, and urges residents of Krakow – expats and Poles alike – to protest when they learn of established trees that are due to be cleared. The group was behind a campaign to stop the city cutting all the trees around the Błonia common in as part of a city-led ‘replacement’ project. POE argued that, if trees needed to be razed because of their poor condition, it should be done so piecemeal with some cut and replaced each year.
It is the policy of Krakow’s Board of Public Utilities and Transport Infrastructure to assess the impact of tree felling, and to take into account the condition of trees scheduled to be cut down.
But Chris admitted that it wasn’t just about the environmental aspect – though with the city losing around 21,000 trees a year it’s still an important factor.
He said: “For me it’s about the aesthetics of the city. Having old trees creates a wonderful environment.”
The project even has its own Facebook page – Defenders of Beautiful Old Trees in Krakow.
The final climb took place on September 25, at Plac Marii Magdalena on ul. Grodzka.