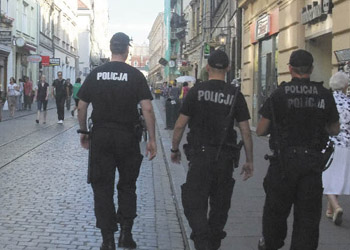 The US Consulate has banned its staff from visiting a club on one of the busiest party streets in central Krakow, following an incident in which three men were seriously injured.

The Consulate also posted a general warning for US citizens, urging them to “exercise caution” at bars and clubs throughout the city.

A spokeswoman for Małopolska police confirmed that three Polish American students had reported an attack on August 2. It is understood that the attack took place at Hedonic night club, on ul. Szewska, four days earlier. The spokeswoman said one of the men – who were aged 19 and 21 – had a broken nose. The others had bruises and scratches.

Police are investigating, but are being hampered because security camera footage at the club is not archived. They are asking potential witnesses to come forward – but the public prosecutor in Krakow has not ruled out asking for US assistance in the investigation.

The newspaper Gazeta Wyborcza said the students were in Krakow studying Polish language and culture, at the Jagiellonian University. While out with a friend, they were dancing at the club, when one bumped into a woman on the dance floor. The newspaper reports that a fight broke out, after which all three students struggled unsuccessfully for some time to escape from the club. Another newspaper, Nowy Dziennik, reported that the students told a press conference that onlookers laughed as they were beaten, and that nobody offered to call the police.

In a joint interview with Gazeta Wyborcza, the families of the injured men said: “We want to tell Krakow – do not ignore this case. How is it that young Poles can be beaten unconscious on the street, just a few dozen metres from a police station?”

The families have also written to Krakow’s mayor Jacek Majchrowski, asking for an explanation of the incident. An extract from the letter reads: “We, the parents, and the whole Polish community in the United States, cannot understand this and look forward to your clarification. We do so also on behalf of many others who for various reasons do not publicise their cases. The fate that befell our sons is not an isolated accidental, but part of a series of similar cases.” At the time of writing, the families had not yet received a reply.

Wyborcza listed a series of other attacks in Krakow over the past three years. They included: a gay couple, American and Swedish, who were attacked outside a club in Kazimierz in 2009; a street brawl on ul. Floriańska last summer, and an assault during which Polish theatre director Krzysztof Garbaczewski was beaten and sprayed with pepper spray, at ul. Sławkowska in July this year.

The Krakow Post visited Hedonic, but encountered no problems with either staff or guests. Nobody from the club was available to comment formally.

However, the US Consulate has taken the allegations very seriously, and posted the following on its website: “The U.S. Consulate General in Krakow encourages U.S. citizens to exercise caution at bars and clubs in Krakow. When visiting clubs, bars, and other public places you should be aware of your surroundings and try to avoid conflicts. Recently an extremely violent assault was reported at Club Hedonic on Szewska Street 9 in Krakow. As a result of this incident, the club has been designated as ‘off-limits’ for U.S. Government personnel. We recommend exercising extreme caution in the vicinity of this night club. If you witness or become involved in a violent attack, extricate yourself from the situation as quickly as possible. Contact the nearest police officer immediately and notify the American Citizen Services section at the Consulate.

You can get global updates at the U.S. Department of State’s Bureau of Consular Affairs website, where you can find the Worldwide Caution and current Travel Warnings, Travel Alerts, and Country Specific Information. If you don’t have Internet access, you can call 1-888-407-4747 toll-free in the U.S. and Canada, or outside the U.S. and Canada on a regular toll line at 1-202-501-4444.”

The American Citizen Services section at the US Consulate General in Krakow is open to US citizens Monday through Friday, from 8:30 am. to 5:00 pm, excluding Polish and American holidays. Please see the web site for more information. In the event of emergency, you may contact the Consulate Duty Officer after hours at: +48 601 48 33 48.