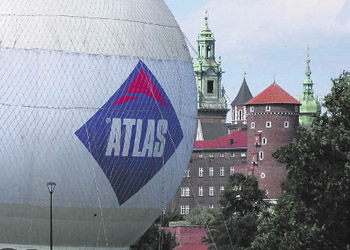 Last year there was no fixed-line balloon on the bank of the Wisła – and plenty of protestors who hadn’t wanted it there the summer before were delighted.

Now it’s back, and when the season ends on September 30 it will have carried hundreds of sightseers – tourists and Cracovians alike, 30 at a time – to a height of 185 metres from where they can enjoy a panoramic view of the city. By night, it can often be seen from several vantage points, lit up like the moon – albeit the kind of moon emblazoned with the slogan ‘Kocham Krakow’ and the logo of chemical company Atlas.

It is bringing in money for the city’s coffers, and there is certainly a great view from up there. But it’s still not to everyone’s tastes. In fact, one unknown protestor grounded the balloon with a bolt from a crossbow in August. Nobody was hurt, but it prompted questions about just why this attraction causes such a furore.

Christopher B Gray – US expat, teacher, musician and environmental campaigner who has lived in Krakow for 12 years – believes the discontent is a lot more than Nimbyism.

He told the Krakow Post that he could not condone the attack, and that it was difficult to tell whether it was a youthful prank or a serious attempt to remove the balloon for good. But, he added, he has been part of non-violent protest against the balloon for several years.

Mr Gray added: “In my opinion it is not the location which is the main problem, but the existence of the object itself, especially when it is airborne. This banal object dominates the skies above the city and in addition to being an advert for itself, it now has an additional advert on it. For me it is like someone had decided to fly a giant flag of a foreign nation above Krakow. This nation could be called the nation of commercial devastation. The advertisement balloon is not from Krakow and has absolutely nothing to do with this unique and beautiful city.”

He also cited other European cities that have similar installations. Such balloons were, he said, destroying the unique value of each city.

“Being some of the highest objects around, and due to the fact that they move in the air, they become one of the most prominent things in each city skyline,” said Mr Gray. “A wise photographer once said that if he took a photo and the balloon was in the photo, the photo then became a photo about the balloon.”

But shouldn’t everyone be able to see the splendour of Krakow from above?

According to Mr Gray, there’s no need for a balloon – or a 100 złoty family ticket – to achieve this. He organises walks up the mounds around the city, from where visitors can see Krakow laid out beneath them, for free, and with no balloon to get in the way of the photograph.

What do you think?