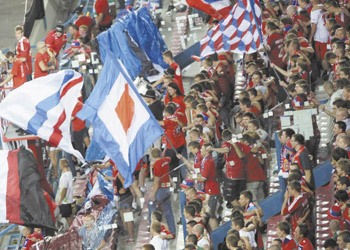 I was waiting for the first blow. I was sitting on the edge of my seat in a section two away from where the rough and tumble, Polish football fans – the ‘Ultras,’ as they are fondly called – were up on their feet long before the match even started. It was my first Polish football match in Krakow, known as the ‘City of Knives’ for its hooligan rivalry. Wisła Krakow, the team I had no choice but to root for unless I wanted to be shunned by my Polish family, was playing Bulgarian team PFC Litex Lovech.

For years, I had heard tales of the violent reputation of Polish soccer fans, and particularly of the ‘Holy War’ between the two Krakow teams, Wisła and Cracovia, which sometimes leads to knife-throwing fights that spill out onto the streets. “The women are no better than the men. Sometimes they’re even worse,” said one fan on the day of the match. I could only imagine what the scene will look like when Poland co-hosts Euro 2012.

When my cousin Peter bought us tickets, I was surprised when he asked for an identification number. I read him the number on my New York driver’s licence. “What for?” I asked. Every fan who enters the stadium is accounted for. Your full name is printed on your ticket and IDs are checked at the gate as you go through a thorough pat down. Peter got me a discounted ticket for 38 złoty, since I was a woman – he paid 47. Either it was a gentlemanly courtesy to Polish female fans, or I was being lured into dangerous territory.

And I am not talking from pure paranoia. Take a look at the Poland episode of The Real Football Factories International and English actor Danny Dyer’s encounters with violent hooligans. During a Wisła versus Parma match in Krakow in 1998, a Wisła fan threw a knife at Italian player Dino Baggio, striking him in the head. Wisła was banned from European cup play for a year. More serious injuries and deaths have occurred during fights between Wisła ‘Sharks’ and Cracovia ‘Anty Wisła’ hooligans.

Before heading to the match, we met at a bar on the AGH college campus, where a sea of students in red were gathering to walk en masse to the nearby Wisła stadium, on the opposite side of Błonie from where the Cracovia stadium stands. Police in riot gear – I counted about 50 outside a recent Cracovia match – would have just enough time to hold down a fan dashing for the other side. Just outside the stadium, where a huge sign read “Welcome Fans,” in Polish, a police truck with a water cannon was positioned by the entrance. Fans were decked out in red, the home colour, with traditional scarves draped around their necks that they lifted while singing the Wisła songs. I asked what would happen if I yelled out, “Cracovia!” Peter gave me a stony look.

We were seated high above the stadium. A few rows below me, a man wore a red jacket emblazoned with the word, “Polska,” and a huge, white Polish eagle across the back. Two sections to my right, in the “Dziesiątka” (ten) section, were the Ultras. When you buy match tickets, you have to specifically request to sit in that section if you want to be among the most raucous. Down on the field, a mascot dressed as a dragon, a symbol of Krakow, danced around. Next to the field, a row was designated for fans with disabilities. At the end of the match, the Wisła players traditionally greet them before heading out.

Security was lined up along the edges of the stadium, especially dense where the Ultras sat. As soon as the match started, the first Wisła song began. Scarves were raised above fans’ heads as the Ultras, with a designated song leader and band, lead the chant. “How many songs are there?” I asked my cousin. “I have a CD you can borrow,” he replied. There were nationalist songs, simple “Wisła! Wisła!” chants, songs laden with Polish curses, and even spells.

My favourite Wisła chant came around the middle of the game. I watched the fans lift their arms straight out in front of them, their hands quivering from side to side, and let out a unanimous, spooky “Wooooooo!” I asked if they could possibly be casting a spell on the opposing team? I was right. I lifted my arms and joined in the spellbinding sound. The fans near me had been looking anxious. A row of men leaned forward in their seats, watching the match as anxiously as stockbrokers watching the Dow Jones fall 300 points. The spell must have worked – Wisła won the match three to one, and there was more singing and hugging and jumping in the air than at a Polish wedding.

I confess I wasn’t paying much attention to the game itself – I was entranced by the fans, by their love of the game, by the religion they practise at bus stops, in cars, or shouting at the radio or the TV. They were students, labourers, white-collar workers, Polish-Americans, Brits, Bulgarians, all mixed together in a sea of red and white Polish pride. They were rooting for their beloved team, in which only a third of the players are Polish. Israeli Maor Melikson is a favourite, and other players come from Honduras, Argentina, Serbia and Costa Rica.

Before I got on the bus home, I had to decide whether it was safe to travel in my Wisła jersey. “Yes, if you don’t mind getting an axe in the face,” my brother told me earlier. It was decided I would be fine if I was with fellow fans. But the fans quickly dissipated and got in their cars, leaving me, the sole Wisła fan, sitting at the bus stop directly across from the Cracovia stadium.

I was paranoid, and thought others waiting for the bus were giving me dirty looks. I sat calmly, my red jersey bright as a cardinal in the headlights of passing cars. It was almost midnight, and I hurried onto the bus. Ten minutes to go, I thought. In front of me, a girl started fighting with her boyfriend, who kept glancing towards the back of the bus at a group of guys. He was trying to move towards them, but she held him back. I expected a brawl, and saw myself getting dragged into it because of my shirt. Before anyone could make a move, I jumped off the bus, and realized I was safe. Across the street, fans in red shirts were downing zapiekanki and kebabs at a kiosk – I was in Wisła territory now.

3 thoughts on “Football in the ‘City of Knives’”