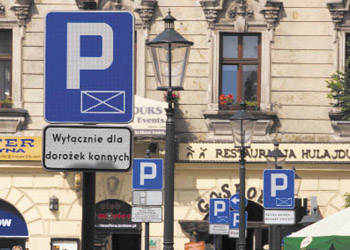 If driving in Krakow can sometimes be a nightmare – negotiating trams, unwary pedestrians, Brits who look the wrong way and potholes – parking is becoming an increasing problem.

First there is the long-standing lack of parking spaces. The city is noticeably lacking in multi-storey or underground car parks, and most drivers rely on small lots dotted around the city or take advantage of on-street parking.

And it is on-street parking that has been ruffling feathers, with some drivers parking in places they have used quite legally for years, only to return to find that their cars have been clamped.

The Krakow Post heard from several motorists, foreigners and Poles alike, who have been hit with unexpected fines after rules for their usual parking places were suddenly changed, or previously free spaces became subject to payment.

One said: “Even if you do notice that you have to pay, you still have to find someone to give the money to. You can be walking around looking for someone, and while you’re gone they see your car and give you a fine.”

One particularly confusing hotspot is around Plac Szczepański, which has a forest of signs instructing drivers how, where and when they may park – some of which were recently changed. Another is Kazimierz, where rules about parking charges were changed in the spring. On Ulica Paulińska, the direction of traffic was switched, and streets around the Old Town such as Ulica Krupnicza, have ‘one way’ rules that allow traffic to enter from either direction providing vehicles turn off before a point that is marked by a hard-to-spot sign.

Parking rules in Krakow are governed by an office under the auspices of the city council. Residents can obtain parking passes for given zones, but anyone driving into the centre is advised to check for signs before leaving their cars – even if they have not encountered problems before.