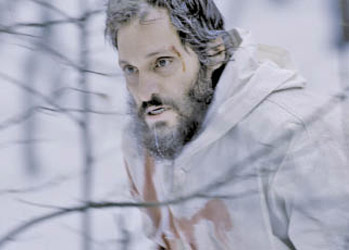 The third period of Jerzy Skolimowski’s career as a cineaste, following a 17-year break from directing, has taken a distinctive form after only two features. During his Californian exile, Skolimowski painted and sold many of his de-Kooning-esque abstract works and enigmatic self-portraits. His unconscious conservatism as a painter clashes more and more with his radical approach behind the camera. As with Four Nights with Anna (2008), which marked his cinematic comeback, Essential Killing is a one-character movie with dialogue reduced to the bare minimum. This half-masterpiece deals with the escape of a suspected terrorist through the sleet and snow of a Mazurian forest, which is where the film director himself relocated after leaving his ocean-view estate in Santa Monica.

Skolimowski succeeds in directing a minimalistic escape movie that enhances the physical performance of a wonderfully unrecognizable Vincent Gallo as the Taliban runaway. Roman Polanski’s wife, Emmanuelle Seigner, plays a symbolic role as a silent angel of death who rooms for one night with the dying escapee. Essential Killing tackles the many-sided taboo of Polish politics and the CIA’s covert operations at Stare Kiejkuty magnificently, treating it as a cruel, life-or-death struggle in a snowstorm