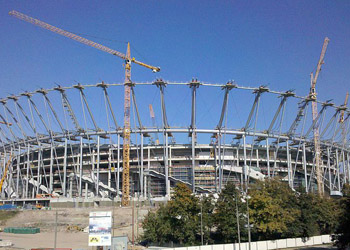 The Krakow Post interviewed Mark Silberstein, a journalism student from London who participated in a fact-finding mission to the city for Gazeta Wyborcza’s Misja 21 program.

The Misja 21 (Mission 21) program brought 21 journalism students from London’s City University to experience Poland. The specific goal was to see how ready the country is to host EURO 2012. The students were sent to 21 Polish cities and asked to try out public services such as transport and to experience the Polish way of life.

Mark Silberstein chose Krakow. Before he came to Poland, the 34 year-old journalist, originally from South Africa, knew very little about the country. He said: “I’m going to Poland to do a good job, but I am also going to the country my grandmother is from. She is Jewish and left Poland in the 1920s for South Africa. It is the country of my roots.”

Gazeta Wyborcza readers contributed to a list of do’s and don’ts for Mark’s trip and a Polish journalist documented his experiences. The list of recommendations included the Wieliczka salt mine, recently opened museums in the Sukiennice and the Shindler Factory, seeing the Market Square from the top of St. Mary’s tower, visiting Plac Nowy in Kazimierz by night and walking along the river bank. Mark was warned against Krakow train station, Melex and horse-drawn carriage tours, travelling to Ruczaj by bus, ul. Szewska on a Saturday night and kitschy monuments.

Krakow Post: You seem to have liked Krakow, despite its faults. Which terms or phrases do you think most accurately describe the city?

Mark Silberstein: I would say that Krakow is a beautiful city full of rich history and culture, but with a past of haunting shadows that are being confronted and overcome by the wonderful, friendly and enthusiastic energy of the young people who live there.

KP: Is there a big gap in knowledge of English between younger and older generations?

MS: That is a good question. In information centres, shops and other places where I spoke to people they were usually filled with young people and their English was brilliant. I hardly spoke to older people but, yes, when I did I found that English language skills were non-existent in many of that generation. This is fair enough though, as obviously they come from a generation that grew up never having contact with the West.

KP: You seem to have liked all the ‘must-sees’ recommended by Cracovians. What about the ‘don’ts’? Were readers right, or did you found something worse that Poles haven’t noticed?

MS: Yes, I did like all the recommendations from readers. Both the ‘must-sees’ and the ‘no-no’s’ were accurately picked for their categories in Krakow. I didn’t find anything else really worse. I might have, but for the amount of time I had I only had the chance to truly experience the list. The kitschy stuff is standard in all cities around the world, as I wrote in a piece about the eternal tourist always following the obvious choice. London has it too, so no, it is no surprise and quite comparable with my city for levels of nausea.

KP: Xenophobic and anti-Semitic comments were made on the Internet to the effect that you were only coming to Poland to “reclaim your property.” Do you think these were just stupid antics or a serious reflection of Polish attitudes?

MS: The eternal question, and one that I have been asking myself since I first read some of these comments. I discovered a long time ago that ignorance and lack of education causes smal-mindedness and that these sentiments spring from fear of the unknown.

KP: Were you satisfied with Krakow vice-mayor Magdalena Sroka’s answer to your question about the tolerance of anti-Semitism? She said that foreigners don’t come to Krakow to read Internet posts and that anti-Semitic slogans need to be understood in the context of football club rivalry rather than taken literary.

MS: No, I absolutely was not satisfied with her answer. With all due respect to Magdalena Sroka, she was a very nice and friendly person, but as with all bureaucrats and politicians, she would rather sweep issues under the carpet and downplay them. This allows them to avoid taking responsibility for problems that actually fall to them to improve. I have a feeling that Ms. Sroka was not prepared for my interview and thought she could just dismiss the anti-Semitism issue and I would just go away. She should have read my posts, because I didn’t go away. In the end, she posted an apology for her blasé attitude towards these issues on her website. But will anything change in the end? I don’t know.

KP: Do you think that prejudice is normal in Krakow?

MS: I think that it is a small element of society in Krakow – I don’t think it is the norm. I am probably right in saying that people with these sentiments have been abandoned by the state, as in all cities, and left behind by the education and welfare systems to fend for themselves.

KP: Do you think it would be a good idea to ask Krakow’s expat community about the city once in a while?

MS: Possibly. I mean, once you leave and are an outsider looking back, you are always more insightful than when you are inside looking out. As long as people want to keep searching and making positive improvements to themselves and their cities, that is the most important thing, regardless of where you ask for opinions.

KP: Will come back to Krakow?

MS: I love Krakow – it is a wonderful place. I will be back. Once again I want to thank all those people who welcomed me with open arms to their open city.