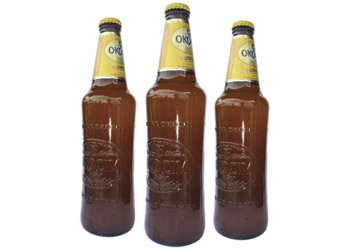 Following a, frankly, disastrous Beer of the Month jury session this month I’ve been thrown on my wits in the search for something to write about. We found nothing remotely beer-like to attract our enthusiasm. I suspect that, like everything else in Poland, the creation of interesting beers comes to a screeching halt in the summer, which is a shame since there isn’t much else to do in the summer except sample interesting beers.

Part of the problem was that we spent much of the evening inventing a crypto-zoological story intended to fill empty news pages – something like an inexplicable black panther spotted in Prądnik Czerwony or a chupacabra rampaging through Jubilat. The best we could come up with was a phantom giraffe glimpsed through a fourth-floor window on a foggy day – an image that still gives me spine creeps.

With the deadline approaching I made the executive decision to declare this ‘Give Okocim a Chance’ month. The premise was devastating in its simplicity: go to a beer shop, buy every variety of beer with ‘Okocim’ on the label and then decide which of them is the least awful.

Since it came in a classy-looking, black can I started with Okocim Mocne. I wished I hadn’t when I regained consciousness many hours later. Not only is it remarkably strong, there’s some arcane chemistry going on in there that leaves you feeling as if you’ve been beaten around the head with the stuff rather than having drunk it. Not recommended, unless you regularly sleep under a bush in the park and wish to continue doing so.

Next up was Okocim O.K. Beer – I’m not making this up, it’s what they call their premium export pilsner. Please rearrange the following words to construct your own punch line: ‘okay O.K. beer Okocim is.’ I assume the corporation has a suicidal marketing executive on its payroll somewhere.

Much, much later I got around to Okocim Pszeniczne, which turned out to be remarkably palatable, largely because it doesn’t taste anything like beer. It is, in fact, a wheat beer. People often complain that wheat beers taste like bananas or bubble gum, but this is simply the chronological coincidence of them having tasted bubble gum and bananas before wheat beer and should be ignored. Given that there doesn’t seem to be any normal beer around this month, it’s a fitting winner.