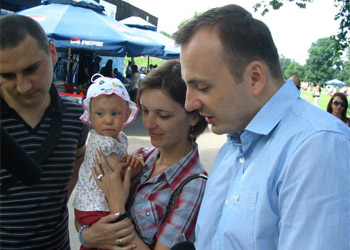 Politics in Poland is something of a paradox. The country as a modern, democratic and arguably ‘Western’ nation it is young, barely in its 20s; but it is governed, both centrally from Warsaw and locally from regional capitals such as Krakow, by an ageing body of MPs, mayors and councillors.

So Łukasz Gibała is somewhat atypical. He has been a member of the Sejm since 2007, despite the fact that he will not celebrate his 34th birthday until next month. While he admits that it has been a struggle for young people to break into national or local politics, he also sees the benefits of having a younger generation of law-makers and governors in Poland.

Mr Gibała said: “I believe that the older generation are people who were educated in the Communist system, and they may have problems understanding certain things. The world has changed, so it’s good to have new blood.”

That’s not to say that Mr Gibała believes that the old guard will loosen their grip on the reins soon, significantly or even willingly. He cited what he sees as an in-built prejudice towards older party members – and he made no distinction between his own party Civic Platform (PO) and the opposition Law and Justice (PiS) – to the extent that seniority still comes with age regardless of ability.

He said: “It is a problem; I am not happy about it. The reason is that our political system is constructed in such a way that it’s very difficult for a new person to have any influence.”

He outlined the system used in Poland – where voters elect a party rather than a candidate, and it is the party that draws up a list of prospective parliamentarians. Generally, seats won in an election are allocated by the party from the top of the list downwards. However, there can be exceptions, such as when PiS won parliamentary elections in 2005. Jarosław Kaczyński was the prime ministerial candidate at the time, but Kazimierz Marcinkiewicz was appointed to the post – largely because Kaczyński did not want to damage his brother Lech’s chances in the upcoming presidential election. Only after Marcinkiewicz resigned in 2006, and Lech Kaczyński had secured the presidency, did Jarosław Kaczyński become prime minister.

The Kaczyński-Marcinkiewicz affair was certainly an anomaly, but it shows how much control those who draw up the lists have over who will rise to power, and who will not. And the lists are drawn up by, predominantly, senior (read older) party members.

Mr Gibała added: “The party builds the list. The person higher up in the party is higher on the list, and the party decides how much money each person can spend on their campaign according to their position on the list.”

As an example, he cited the last election. Candidates at the top of the list spent 200,000zł on their campaigns; those at the bottom were allocated just 10,000zł.

Clearly, however many hurdles one has to clear in order to move up the party, it is not impossible for a newcomer to make it; Mr Gibała himself is proof of this. So how did he do it?

“In my case it was to do with direct contact with the electorate,” he said. “I couldn’t spend as much money as I would have liked, but I spent ten to twelve hours meeting people and talking with people and listening to them.”

Clearly, the party could see that rapid elevation for their young candidate in Krakow was good PR – the electorate was certainly not all for PO, but promoting a man who was seen to be actively involved in the community he wished to represent could only be a good thing among public opinion.

And representation comes across as the foundation of Mr Gibała’s political philosophy. Earlier this summer he organised a campaign called ‘Kierunek Krakow,’ which canvassed homes across the city for their opinions on how Krakow should develop. As the Krakow Post went to press, the results were being collated and will be published in the autumn.

One reason for the campaign, said Mr Gibała, was that he wanted to test public support for his own vision of Krakow. This view he outlined by saying that he wanted to maintain the city’s “exceptional” position as a centre of culture, heritage and education, while at the same time encouraging development of a “financial district, where we have new buildings, giving Krakow a strong economy based on new technology.” This vision of a ‘dual-core’ Krakow, fully-functioning as a hub of both culture and business in perhaps as little as 15 years arose partly because Mr Gibała was concerned that Małopolska as a whole could lose skills to cities such as Warsaw if the region does not give people a reason to stay. Jobs and prospects, he said, helped stem migration.

He said: “The population of Krakow is 750,000. In Małopolska there are four million but urbanisation is just 50 per cent of this number. Half of these people live in villages, and this won’t work in the future. The question is, whether we can find a way to accept these people into Krakow, or whether they migrate to other cities.”

With careful economic development and a new financial district, Mr Gibała believes that, rather than stagnating or shrinking, Krakow’s population could boom to 2.5 million during the next two decades. He is aware that in order for such an ambitious plan to succeed he must convince the older, conservative generation – the same generation that controls politics in Krakow and Poland – that it is good for the city. The Kierunek Krakow initiative could be the first step towards this goal; after all, it was diligent footwork and public support that helped him rise up the party list, and there is no reason why the same principle will not work for this project too.

The question is, will he get the support? Mr Gibała certainly hopes so, and believes that a stronger, more economically independent city will win the backing of many. But he conceded that, if the majority turned down his idea, he could not as an elected representative attempt to implement it.

“My experience from business is that, even if you have the power to give orders, you also need the support of your employees,” he said. “If you can’t convince them, it doesn’t make sense to enforce something that they don’t want. It is the same in politics.”

Mr Gibała said that, in such a case, he would probably turn his attention to the national political stage.

Given his career to date, he may well achieve high office at a young age. And if he is one of the advance guard of a new, 21st century era of politics in Poland, it would not be the first democratic country in which a generational sea change swept through the ruling class; one only has to compare the old British Labour and Conservative parties with first Tony Blair’s and then David Cameron’s ‘bright young things’ to see what an impact such a change can have.