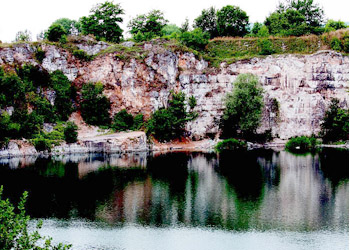 It was a warm Saturday evening early in July. A group of youngsters headed out to Krakow’s little wilderness at Zakrzówek for an al fresco party, intending to make the most of a summer that contrasted so sharply with the harsh Polish winter.

Police said that nine young people attended the party near the man-made lake on the evening of July 9. Only eight returned.

One member of the party, a 19-year-old woman, was at the edge of the lake-side cliff at around 2am, when she lost her footing and tumbled over the edge. The 30-metre fall caused severe head injuries, killing her instantly.

Zakrzówek is unarguably an area of outstanding beauty – a green lung in a city that sometimes struggles to breathe through high levels of air pollution, and the home of a myriad species of flora and fauna.

The value of Zakrzówek, just south of the city centre and in easy walking distance of Wawel, lies precisely in this wildness, and in its unique rural character that contrasts sharply with the rush to develop the surrounding Ruczaj estate where hundreds of homes are being constructed. This is the argument of the pressure group Zielony Zakrzówek, which campaigns to prevent developers encroaching on the area. It is vital, they believe, that nature is allowed to follow its own course in Zakrzówek. Under the banner of a blue butterfly, they organise regular marches, protests and picnics to raise public awareness about the urgent need to protect the site’s rich and varied wildlife.

But, as last month’s accident proves, Zakrzówek’s wildness is also what makes it so dangerous for the unwary. It was the second tragedy in the space of a month, magnifying the glare of the spotlight that had been thrown on the beauty spot following the discovery of the body of 25-year-old Agnieszka Miedziak.

For days before her body was found, Agnieszka’s image was visible on every street in the centre of Krakow. Friends and family had posted ‘missing’ notices on lamp posts, walls and doors, pleading for information about her whereabouts.

Agnieszka had left her home on June 28, to meet her boyfriend. When she failed to turn up police were alerted and the search began. A week later a passer-by spotted a body in the lake at Zakrzówek, police divers were called in, and after a formal identification by family members, the news broke that it was indeed Agnieszka. The newspaper Gazeta Krakowska reported that the discovery prompted two days of prayers at the city’s Dominican church.

The summer of tragedy at Zakrzówek is nothing new. A monument near the lake marks the spot where Barbara Augustyniak died in 2010. And now moves are underway to prevent further deaths.

When the Krakow Post visited the site after the twin deaths, the mood was mixed. On the one hand, summer was clearly in full swing and there were plenty of visitors out to enjoy the countryside, walking, cycling and sunbathing. On the other, the emergency services were present and an ambulance flashed by on blue lights to rescue a young man in trouble. In this case, it wasn’t a fatality but over-indulgence – the man had been drinking in the sunshine and had become ill. The incident illustrated the fact that, in a city where drinking on the street is forbidden and punishable by an on the spot fine, young people find Zakrzówek to be a haven of relative secrecy to indulge. In fact, a barrier had been erected across a road leading from the car park, manned by a security guard. The guard explained that the barrier was meant to be a deterrent, to prevent drivers colliding with intoxicated revellers who sometimes stagger into the road.

According to Gazeta Krakowska, the firm of developers that wants to integrate Zakrzówek into a new estate and make it a managed ‘city park’ is paying close attention to developments. The company, Gerium, wants to break the image of Zakrzówek as a place of accidents, crime and drunken behaviour, and may even attempt to close the more dangerous parts of the reserve until plans for development are formalised. Gerium told the newspaper that, if this happened, access would still be granted to organised groups who use the lake and surrounding area.

It may not make much difference – the cliff tops are already technically out of bounds, but that fact did not prevent the recent tragedies. So it is likely that Cracovians will continue to use the area and enjoy its peace and beauty; the focus on developing the site may now shift to how best to ensure their safety while protecting Zakrzówek’s butterflies and other wildlife.