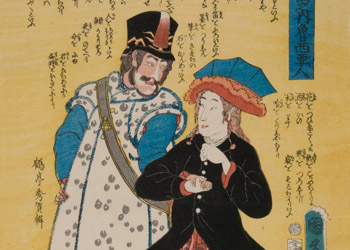 Krakow’s Manggha Museum has recently launched its most ambitious exhibition of the year. Japan facing West features more than 200 items on loan from London’s Japanese Gallery. To some degree, the show can be considered a cultural and moral imperative for the Cracovian institution, which has recently focused on the century-old local craze for Japan that also galvanized Polish critic and collector Feliks ‘Manggha’ Jasienski, to whom the museum is dedicated.

In recent years the museum has arranged several shows dealing with the products of ‘Japonisme’ among Polish artists including Stanislaw Wyspianski and Olga Boznanska – to whom the Krakow branch of the National Museum will dedicate a massive retrospective in 2015. Manggha has now decided to look at the other side of the equation – the influence of the West on Japanese art and culture.

Japan facing West is in the main exhibition room, which encircles a smaller central room where there is a minimalist show of the work of contemporary artist Yoshihiro Suda. The lavishness of the borrowed artwork in the principal room contrasts sharply with the simplicity of Suda’s hand crafted wooden flowers delicately arranged on pale walls. The exhibiton is co-curated by Aleksandra Gorlich and Ewa Machotka in collaboration with Eddy Wertheim of the Japanese Gallery.

The show provides a taste of Euro-Japanese relations. A matchlock firearm and beautifully carved wooden pipes and tobacco containers speak of Japan’s contact with Portuguese missionaries in the 16th century before the country’s 250-year isolation. A Telescope and Arita porcelain remind visitors that Japan maintained exclusive contact with the Netherlands through their trade mission in Nagasaki Bay.

Even while Japan isolated itself from the rest of the world the so-called ‘Rangaku’ discipline (‘Dutch Studies’) flourished. Though diffuse, contact with foreign cultures was maintained before the Meiji Period (1868–1912), which unlocked the coutry and released the ‘Japonisme’ virus to infect European art.

Looking at the famous sketchbook Hokusai Manga (1815) it is clear that Japanese artists did not entirely ignore the linear perspective that came from the European Renaissance. The exhibition includes several Western-influenced woodblock prints that make use of inaccurate perspective, including the sumo and kabuki stages of Utagawa Kanisada and a Tsukioka Yoshitoshi battle scene a-la Paolo Uccello.

Visitors can also see the flamboyant scenes of city life crafted by Kobayashi Kiyochika, a woodblock print artist who managed to find a marvelous balance between the Japanese and European approach in terms of composition and visual style. As a whole, the show makes it clear that Japan never burned all its bridges with ‘the other,’ even during its self-imposed isolation.

Japan facing West is at The Manggha Museum of Japanese Art and Technology until October 16th.