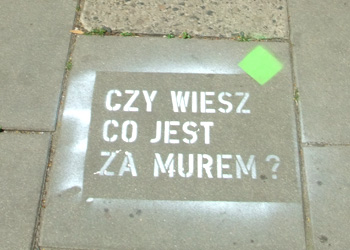 As I young man I was advised to walk tall and look the world in the eye, rather than shuffling along staring at my feet. I was also advised to “Stop and smell the roses,” which can mean a simple trip to the shops taking an awfully long time when you have to divert several kilometres out of your way to find some roses. I’m pleased to report that paying no attention whatsoever to good advice has resulted in some of my most rewarding mistakes.

It was studiously ignoring the first of these nuggets of wisdom that led me to discover pavement graffiti. The ground beneath our feet is an excellent but under-utilised canvas for the willful desecrator of public space. Somehow, words written on a pavement seem much more profound than the same words written on the back of a municipal building, and practically messianic compared to words written in a book or some other place where words are supposed to be written. Maybe it’s an ancient hunting instinct – the idea that tracks imprinted on the earth can lead to a delicious, doe-eyed reward.

The words I saw on this particular pavement were these: “Czy wiesz, co jest za murem?” (Do you know what is behind this wall?). They were neatly stencilled on the pavement at the foot of what was unmistakably a very solid, ancient and non-transparent wall. By playing on two human weaknesses – the desire to see hidden things and jealousy at the suggestion that somebody knows something we don’t – the words made an impression on me. They made even more of an impression when I saw them again at the foot of a different, but equally opaque and massive wall.

I began to see what they were getting at: for all its open-armed welcome to easyJetites and Ryanairies, Krakow remains a surprisingly secretive city. It is, as Churchill once said when he came for a stag night, like “a pickle wrapped in a ham sandwich, shrouded in hot sauce…” or something like that.

Google was flummoxed by the question “Czy wiesz, co jest za murem?” and tried to cover its embarrassment by showing me multiple pictures of prams and strollers. Google Earth was a bit more helpful: fields, there are fields behind those walls. This answers the question in a literal sense, but doesn’t approach the heart of why there are large green spaces in the centre of Krakow surrounded by masonry. Could this be the solution to something I’ve always wondered: what happens to all the horses and Melexes after dark? I imagine them gambolling together in the moonlight, freed from their tourist burdens and safe behind ancient walls. Apparently not – livestock are not allowed to be kept within the city limits, apart from stags obviously.

The second-choice solution seems to be nuns and monks. Monasteries and nunneries have vast, green acreages in the city centre. But what are they up to in there? I’m hoping it’s quiet contemplation, but I can’t escape a mental image of ancient monks cavorting after nuns in stockings while the Benny Hill music plays in the background.