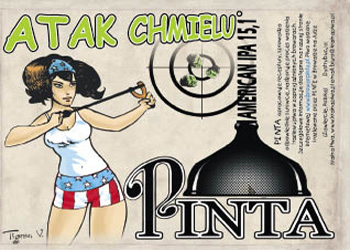 Atak Chmielu (Hop Attack) from Browar Pinta is unpromisingly described by its creators as an American style IPA, which makes it a Polish beer brewed in the style of a US imitation of a type of British ale originally intended for export to India (‘IPA’ is an acronym for India Pale Ale). Pouring the resulting liquid down the throat of an Englishman such as myself should, theoretically, result in an embarrassing rupture in the space-time continuum – or at least considerable grimacing. In fact, it was the best damn beer I’ve tasted this year.

Highly observant and sober readers will already have spotted that the image accompanying the column this month is of a label rather than a bottle. This is not, as is sometimes the case, because my wife scoffed the last example before it could be delivered to the photographer, but because this month’s winner was the first to have made its way over the parched tongues of the Beer of the Month jury via a barrel pump rather than a bottle (glasses did constitute an intermediary stage, at least for most of the evening).

When Beer of the Month started in January, good Polish beers were hard enough to find in bottled form. The fact that they can now be supped directly from the teat of the great beer mother that is the 50-litre barrel is yet another sign of the relentless march of civilisation. All we need now is for someone to invent a device that will allow me to recall why there is photographic evidence of me wearing a Bavarian hunting cap in the later stages of the evening.