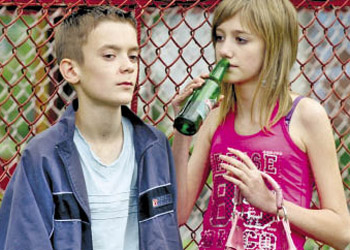 The effect of director Robert Gliński’s Hi, Tereska (2001) on Polish cinema was as quick and sharp as a liver punch. Its gritty realism became a reference point for all involved in the making of social dramas. Geo-historically speaking, this directing style is a-la Dardenne Brothers with a less shaky camera, and anticipated a trend in Eastern Europe later fully exploited by the Romanian New Wave. Though shot in colour, Piggies is a cruel tale of youth forced to deal with the grey life of the ‘blokowisko’ milieu. Tereska passes the baton on to astronomy enthusiast Tomek, who lives in a depressed town near the German-Polish border. After we learn that Tomek is never going to get the telescope he’s been promised by his German-speaking teacher, we understand that his social redemption is beyond reach. Tomek falls in love with Marta, who asks him to find the 1,000 euros she needs for dental bleaching. The boy, interpreted by the shining talent of Filip Garbacz (who later appeared in the touching Mother Teresa of Cats), is then recruited by a hustler procuring Polish boys for German clients. Gliński’s decision to use non-professional teenage actors again proves a smart move. The fact that Tomek brings his passport to cross the German border illustrates Gliński’s subtle talent for portraying a particular class of society – people who are so isolated that they have no unawareness or understanding of innovations such as Schengen.

Director Krzysztof Krauze’s Debt (1999), which dealt with two wannabe entrepreneurs wiping out a loan shark portrayed by a formidable Andrzej Chyra, was an immediate success in Polish cinemas. The question of self-defence in the absence of a state has traditionally been addressed in Hollywood by genres such as the Western, but Debt is one of the few Polish movies to have tackled a story about ordinary people taking the law into their own hands. Krzysztof Łukasiewicz’s debut takes on the same topic by bringing the true story of the Lynching of Wlodowo to the screen. Poland was shocked in 2005 when six villagers massacred a recidivist who had terrorized them for years with his beloved machete. Łukasiewicz exploits this episode to build up a rigorous thriller that also looks at the legal consequences of the murder. The empathy shown towards the killers removes any doubt about the director’s own views on the legitimacy of self-defence in a part of the country abandoned by both god and police. Playing the moustached 60-year-old terror, Wiesław Komasa delivers a first class Jack Nicholson-esque performance – surprising, considering that Komasa admits that this was the first evil character of his career. From now on, Polish cinema will be able to draw on his charisma as a villain-hero whenever required.

Following the global de-Stalinization of 1956, Charlie Chaplin was finally able to gain the recognition he deserved in Eastern Europe. This was also the year that director Andrzej Munk’s Man on the Tracks was released – a film that paved the way for the flowering of the Polish Film School. Munk was the only one of his generation to fully question why the dominant mood of his generation constantly tuned into a dramatic tone derived from neo-realism. The good soldier Piszczyk, as clumsy and cowardly as Private Švejk in Jaroslav Hašek’s satirical novel, is a character without parallel in post-war Polish cinema. In Bad Luck Munk takes the anti-heroism of Heroica (1958) to an extreme where the characters still consider military honour as a moral value. Drifting like a leaf through events, Piszczyk only survives the bombing of a cabbage field thanks to his lucky cowardice. The Polish title of the film, Zezowate Szczęście, translates literally as ‘cross-eyed luck’ and can be seen as a reference to the twists of fate that propel Piszczyk as he goes from prisoner of war to Party desk-jockey. Piszczyk, a precursor to Forrest Gump, is played by Bogumił Kobiela – possibly the most talented comedy actor in the post-war period. Like Munk, he was killed in a car accident in the 1960s. Roman Polanski, still a student at the time, was lucky enough to be Munk’s assistant-director on this, his masterpiece. Polish cinema will never distance itself from Wajda’s imagery that, like the imagery in this movie, pays homage to the golden age of slapstick film.