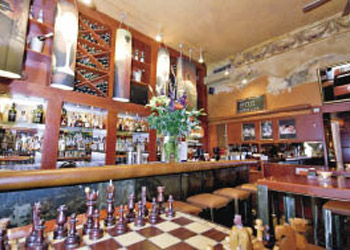 It would be easy to drop a rung or two on quality in a city such as Krakow, and many do. Not so for owner Jonathan Campion, who arrived here from Minnesota, intending to see something of Europe. He had a taste for the restaurant business from an early age, working in country clubs in the United States, and decided to try something of his own in Krakow. Metropolitan was his first restaurant, opening in 2000, and a former bank building became his second – Manzana in Kazimierz. While Manzana offers flavours of Mexico and Latin America, Metropolitan remains the flagship for international cuisine.

Metropolitan’s menu covers all the bases – fish, salads, pastas, meats and desserts – with an emphasis on making something unique from the ingredients. It’s a broad range of temptation that tends to create ordering indecisiveness; indeed, when the very tempting seafood platter passed by en route from the open kitchen to another table, this reviewer made a mental note to make a return visit before he had even tasted a main course.

The fish incident was quickly forgotten when our orders arrived: pan-seared beef tenderloin grilled with sea salt, soy sauce and sake wine with a ginger-pineapple and orange salsa, and chicken Galliano with prosciutto and goat’s cheese complimented with Galliano liqueur, mushrooms and risotto. The salsa and steak were an inspired combination, and a shockingly pleasant surprise for this unapologetic carnivore, who rarely strays beyond basic seasoning when meat is on offer. The chicken and risotto too were far more uniquely flavoursome than the words ‘chicken’ and ‘risotto’ could ever suggest.

For dessert, Metropolitan’s carrot cake is famously – and deservedly – top of the list. There is also a choice of crème brulee, again made to a recipe created by the restaurant, sparkling wine flavoured sorbet, and a rich, creamy chocolate tart. Not a vast range, but promising and delivering quality.

The martinis to round off the meal proved to be among the many stars in Metropolitan’s gastronomic firmament. Who would have thought that cucumber spiced with cayenne pepper could provide such a refreshing lift on a warm summer’s evening. And as for the coffee martini, with real coffee beans… just go, now, and try it.

Overall, there’s no fault to find with the output from Metropolitan’s kitchen. Jonathan’s hands-on approach means he mucks in along with his staff, and he’s a stickler for getting it not just right, but spot-on.

From a service point of view, dining at Metropolitan is a pleasantly unhurried experience thanks to the friendly, helpful and attentive staff. The prices put Metropolitan above fast-turnover, lower calibre establishments in the centre of Krakow, but compare favourably with other restaurants in the quality bracket. Metropolitan is a treat that most can
afford more than once in a while, which makes it a great choice for getting together with friends or colleagues.