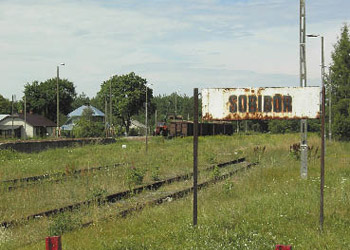 The Sobibor Museum, located at the site of the former Nazi extermination camp, has been closed since the beginning of June due to a lack of funding. Erected in 1993, the museum has so far relied on funds provided by local authorities in the town of Włodawa.

“We simply realized that we could not afford to pay our bills this year, maintenance costs included,” Marek Bem, who works at the museum, told the Krakow Post. “Without a stable budget we can’t make any plans for the future,” he added.

The museum has also received support from private donors and, in recent years, from a program run by Poland’s Ministry of Culture and National Heritage, which has now closed down. “Without the voluntary contributions received so far, we would have shut up shop much earlier,” explained Włodawa’s mayor, Wiesław Holaczuk.

“We met several times with representatives of the state-financed Majdanek Museum in order to discuss with them the option of them also taking on the management of Sobibor. But the final decision depends on Warsaw,” Mr. Holaczuk added.

The Ministry of Culture and National Heritage initially refused to comment about the Sobibor Museum’s financial problems, but eventually announced that the museum will now go through an administrative reorganisation before reopening in 2012.

“Holocaust survivors are aghast that the museum at Sobibor, the site of John Demjanjuk’s crimes, has closed because of insufficient funding by Polish state authorities,” commented Elan Steinberg of the American Gathering of Holocaust Survivors and their Descendants.

In May 2011 Ukrainian-born John Demjanjuk was convicted by a German court of complicity in the murder of over 28,000 Jews whilst serving at Sobibor. Demjanjuk, who is now 91, was sentenced to death in Israel in 1988 after Israeli Holocaust survivors identified him as ‘Ivan the Terrible,’ a notoriously vicious guard at the Treblinka and Sobibor extermination camps. The conviction was later overturned as unsafe.

About 250,000 people were murdered in gas chambers fed with the exhaust from petrol engines at the Sobibor extermination camp, and its sub-camps, between April 1942 and October 1943. The victims included Jews from Poland, France, Germany, Holland, Czechoslovakia and Soviet prisoners of war.

The 1987 British TV drama Escape from Sobibor brought the camp, and the dramatic prisoner uprising and escape that took place there in 1943, wider recognition outside Poland. The camp was dismantled and the site planted with trees just days after the escape. Until 1989 there was only a single monument commemorating Sobibor’s victims. An expedition in 2007 directed by Israeli archaeologist Yoram Haimi successfully uncovered the boundaries of the facility for the first time in more than 60 years and also retrieved many of the personal possessions of its victims.

One thought on “Sobibor Museum can’t pay the bills”