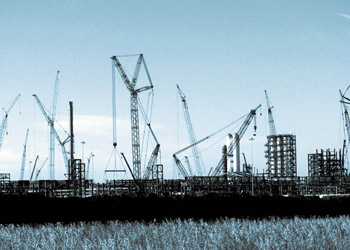 Is Poland on the verge of achieving energy independence for the next 300 years? This is the tantalising prospect raised by an April 2011 report on Polish shale gas deposits. Billions of złoty are at stake in what Foreign Affairs Minister Radosław Sikorski has called: “the gold rush of the 21st century.” Some of the most deprived parts of southern Poland are now firmly in the sights of global energy giants, but what will this mean for our region?

April 8, 2011 may become a red-letter day in the history of Poland. This was the date of a US Energy Information Administration (EIA) report on shale gas deposits in Europe that included the assessment that Poland has the largest and most-easily accessible reserves on the continent. If the minimum of three trillion cubic metres of shale gas that the EIA believes lie deep beneath Poland can be found and extracted, it will mean billions of złoty for the Polish economy and potential energy independence for centuries.

Anticipating the findings of the EIA report, Prime Minister Donald Tusk said in March that the government is determined for shale gas excavation in Poland to become a fact and to make the search for independent energy sources a priority. Supporters are calling shale gas an ‘energy revolution’ and pushing for the utilisation of every cubic meter of shale gas available. The so-called ‘blue gold’ has kindled hopes for energy security and wealth for many.

Shale gas is a form of natural gas trapped in fine-grained sedimentary rock. Natural gas has been extracted from shale for decades, but most shale deposits are insufficiently permeable for conventional extraction methods to produce commercial yields. However, rising natural gas prices and advances in mining technology have made shale gas an increasingly attractive prospect for energy companies. Increasing shale gas extraction has revolutionised the energy market in the United States over the past 20 years. In 1996 shale gas made up less than two per cent of total US natural gas production. This reached 14 per cent in 2009 and is projected to reach 45 perc ent by 2035. The US experience has created a global burst of enthusiasm for shale gas, not least in energy-hungry Europe.

US energy companies are world leaders in shale gas extraction. The process involves drilling vertical bores with multiple, deep horizontal bores branching off. A mixture of water, sand and chemicals is injected into these side bores under high pressure to loosen the rock’s structure and release gas. This process, known as hydraulic fracturing (or ‘fracking’) has become highly controversial following claims that it risks contaminating ground water or even triggering seismic events.

Gasland, a 2010 documentary directed by US filmmaker Josh Fox, investigated claims of environmental damage caused by fracking across the United States and claimed to have uncovered numerous examples of health problems or ground water contamination. In the UK, test drilling for shale gas was suspended in June this year to allow an investigation to take place into the possibility that it had caused two small earthquakes on the Lancashire coast.

Given that the cost of just one shale gas well is more than 40 million złoty, and the effective exploitation of just one concession requires around 60 wells, the millions of dollars that US companies such as ConocoPhillips, ExxonMobil, Chevron and Marathon Oil can invest in Poland will be most welcome. Turning to the Americans, however, brings a geopolitical headache. Russia has long regarded Poland as within its economic sphere of influence and Moscow is less than happy that Warsaw is looking west rather than east for help. American companies have already crossed Gazprom’s plans for expansion in Norway and Azerbaijan and the Russian Minister for Natural Resources, Yuri Trutnev, has called shale gas “a problem.” Russia’s Gazprom, the biggest natural gas producer in the world and the owner of one sixth of known global gas deposits, has tried to downplay the importance of shale gas in the past, but has recently joined the rush to find its own.

Poland’s shale gas deposits can be found in a belt running diagonally across the country, from Zamość in the south east to Słupsk in the north west. The Polish Ministry of the Environment has issued almost a hundred permits for shale gas test wells, most to foreign companies. The first bores in the Pomorze region have produced promising results. The area would be a good place to start, given its existing gas distribution infrastructure and energy-hungry industry. However some villages near the seaside resort of Ustka are not happy at the perspective of a shale gas Shangri-La in their backyards and have voted against drilling in the area. “The River Słupia is a favourite for fishermen from all over Poland, many local families make their livings from agritourism and many people have moved here to escape the city and industry. No wonder they will never agree to shale gas,” said Bogdan Żabiński, head of seaside village Niestkowo.

Villages across Poland have been protesting about the possible negative impact of shale gas extraction, especially in the light of concerns raised by Gasland and media reports. According to Poland’s head geologist, Henryk Jezierski, all threats to the natural environment will be taken into consideration before issuing actual concessions for commercial shale gas extraction.

Large parts of potential shale gas extraction areas in Poland are either densely populated or within environmentally sensitive areas protected under the EU’s Natura 2000 program. At the present time, Polish law has little to say about unconventional gas extraction techniques and there are no provisions for tax breaks for extraction or exploration operations. Nevertheless, the race has begun. Norwegian advisory company Rystad Energy AS estimates that Poland will have 330 test wells within five years. All major laboratories in Poland are already busy testing tens of thousands of samples.

“All current calculations are based on statistic estimates. To see if there really is any obtainable shale gas in Poland we need to obtain samples from test bores and determine rock hydrocarbon saturation in laboratories. Obtaining and analyzing an appropriate number of samples is both expensive and time consuming – the first results will be known in several months. An economical assessment will follow,” said Prof. Stanisław Rychlicki, CEO of the Polish Petroleum and Gas Mining Industry board. Shale gas extraction on a minor scale may be happening in Poland with four years, but large-scale production and utilisation is at least a decade away.