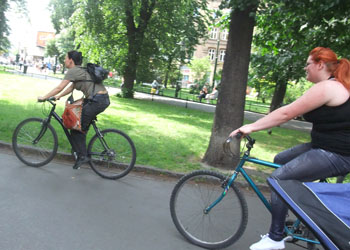 A letter to Gazeta Wyborca Krakow recently raised a question that has occurred to many visitors to Krakow – is it actually legal to ride a bicycle around the Planty?

Reader Wita Kosińska wrote: “I have a vague recollection that it was banned in my youth” and added: “A few days ago I was hit in the arm by a boy cycling very fast, and it occurred to me that I haven’t seen any police stopping people riding bicycles in the Planty recently.”

Most of the public response agreed that cyclists should not be speeding through the Planty the way many of them seem to, and that there should be a cycle lane to separate them from pedestrians. One commenter pointed out that the lack of cycle lanes in Krakow poses a general problem, both for cyclists and pedestrians.

Marek Anioł, a spokesperson for the City Guard of Krakow, said that there is no rule prohibiting people from riding bicycles in the Planty: “The Planty has its own rules and they do not ban cycling. Traffic police on patrol ride bicycles through the Planty” he points out “and it would be strange if they were doing so in violation of the law”. “Cyclists who violate safety standards will be stopped, of course” he concluded.