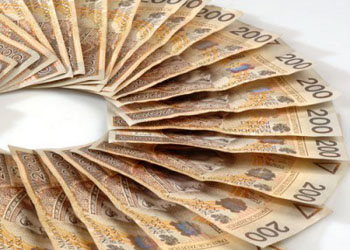 Krakow’s debts could reach 260 million złoty by the end of this year – 13 times higher than official figures suggest – according to a report by an independent think-tank based in the city.

The Kosciuszko Institute, which analyses economic trends locally, amongst other areas of research, issued the report showing the true potential depth of Krakow’s debt problem. Officially, the projected budget deficit for 2011 stands at a modest 20.3 million złoty. However, this does not take into account the debts of companies that are registered separately but are dependent on the city.

The report said that, when these ‘hidden debts’ are taken into the account, they could push the official deficit estimate up thirteen-fold.

Overall, Poland’s biggest cities have official debts of approximately 19.7 billion złoty – rising to an estimated 27.4 billion złoty when hidden debt is factored in. Although Krakow’s actual debt was found to be among the largest in Poland, the cities of Poznań, Szczecin and Bydgoszcz all have more hidden debt than declared deficit projections.

Monitoring the budgets of major Polish cities is part of the work of the Kosciuszko Institute’s Economy and Finance section. Their analysts pay special attention to the balance between each city’s debt and revenue. The practice of local governments creating separate companies to bear the financial burden of some projects, and thereby removing debt from their books, has been heavily criticised by the institute. It states that this is “bad practice” because it “disorganises the financial regime, dilutes responsibility for debt and introduces disinformation as to the actual state of the public finances of local government entities.”

The institute’s mission statement regarding budget monitoring adds: “Apart from the official budget figures realized subsequently in the course of the financial year, we shall also include information about the financial state of the companies in which the cities have acquired stocks or shares, especially if they are their sole owners.”

The purpose of taking into account the finances of these companies, says the institute, is to ‘sensitise’ authorities to the problem of indebtedness, and to improve transparency in public finances so that ordinary members of the public can access and understand information.

Recent high-budget projects in Krakow include a futuristic sports arena near Nowa Huta, for which the city has borrowed 300 million złoty from PKO Bank Polska, and a long-awaited tramline to Ruczaj, costing 150 million złoty – 53 million of which is coming from European Union funds.

Although the city’s actual debt may be many times higher than the published deficit, when the money owed by local authority-dependent companies is taken into account, Krakow is still marked as ‘investment grade’ by the biggest credit reference agencies. Moody’s, Standard & Poor, and Fitch all put the city right at the top end of the ‘lower medium grade’ category.

And, while the city itself may owe 260 million złoty, it’s mayor, Jacek Majchrowski, has deeper pockets. Research by the newspaper Rzeczpospolita, based on declared earnings and income from investments, estimated the personal wealth of Mr Majchrowski at about 2.7 million złoty.

This makes him the third richest local politician in Poland, after Warsaw’s Hanna Gronkiewicz-Waltz (4.9 million), and Gdansk’s Paweł Adamowicz (2.8 million). Even in Olsztyn, capital of the unemployment-stricken and poverty-stricken Warmia-Masuria region, mayor Piotr Grzymowicz has a declared personal fortune of 1.6 million złoty. Five other cities – Wrocław, Poznań, Szczecin, Rzeszów and Gorzów Wielkopolski – also have millionaire mayors, according to Rzeczpospolita’s report.