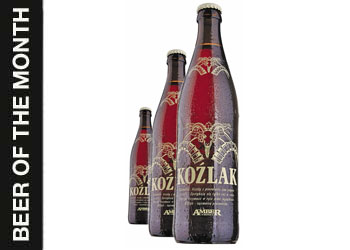 We are now six months into our epic exploration of Polish beers and, as with all good stories, there is a game-changing twist in the tale.

As good, sensible beer reviewers, we convened on a Thursday evening rather than a Friday so that we could concentrate more on the business of tasting beers and less on the business of fighting our way through thirsty Cracovians to get to the beers, only to discover everywhere was dead because it was the start of Juwenalia – a counter-intuitive but striking phenomenon.

In what seems like thousands of hours of experience on Beer of the Month duty I’ve noticed that the greater the range of nationalities on the jury, the more difficult the decision process becomes. On this occasion there were two Brits, a Swede, a Czech and an American – a recipe for near-certain deadlock.

The Swede immediately confused the assembly by introducing the subject of snus – a form of tobacco that comes in a small teabag that you place under your lip – and pointing out that it is technically illegal in the EU even though it has the power to turn your teeth brown and make inexperienced users dribble in an hilarious manner. Meanwhile, the American and the Czech confirmed suspicions that what women really want is not hugs and commitment, but beer with fruit juice in it.

It was in the midst of this unsatisfactory state of affairs that the odd thing happened. Gazing at the wall of bottled beers I spotted a lone example of Shepherd Neame’s Spitfire Ale – an English beer that is among those I would automatically order if I saw it on tap in an English pub. I ordered it, tasted it and had a Damascene moment – no angel’s dancing on my tongue! It wasn’t any better than the Polish beer I had just finished. Six months of delusional, nostalgic prejudice were swept away. And because it was there, at that moment, this month’s winner is Koźlak from Browar Amber – just as good as Spitfire Ale.