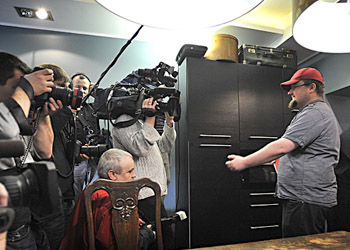 It is no surprise that the Smolensk catastrophe has awakened the visual imagination of the nation. Immediately after the tragedy, Poles were subjected to a few clips of first-hand footage from the crash site broadcast repeatedly by news programmes. Since then, Internet users have obsessively re-edited the original footage, often reshaping the truth to fit their own hypotheses about the disaster.

One year on, the Polish media have produced a plethora of works including reportage, television investigations and documentary films but no feature films, until now. Piotr Matwiejczyk took up the challenge of tackling the tragedy from an intimate point of view at the beginning of the year. The recently-released Prosto z Nieba (Straight from Heaven) was the result. In the same period the versatile Matwiejczyk brothers completed the editing for Zombielove – a no-budget horror movie à la George Romero set in a cemetery near Poznań.

Along with his brother Dominik and Indie names such as Bodo Kox, Matwiejczyk is one of a prolific group of Polish moviemakers who have recently been able to create more-than-decent films with only a few tens of thousands of zloty. The Krakow Post talked about the production of Prosto z Nieba with Matwiejczyk before the final editing of the film was completed a few weeks ago.

KP: Why did you choose to deal with this topic?
PM: When I tackle a new project I always try to find one that can be linked concretely to normal people struggling with their everyday problems and fears. Before now I have attempted to touch on various subjects considered taboo by Polish directors, such as abortion and homosexual adoption.

KP: From which angle did you look at the Smolensk catastrophe?
PM: The action of this feature takes place among ordinary people facing a national tragedy at the same time as a personal tragedy. Briefly, it is the story of normal individuals facing the consequences of family loss.

KP: Is the script based on the true stories of victim’s families?
PM: I used a lot of sources for the story. The script includes many statements from people who are, to some extent, connected with the disaster. Do my sources come from the families or politicians? Alas, I’m not able to disclose more details about this for reasons of privacy.

KP: Will the film include footage about the crash and its coverage by the Polish media?
PM: The final cut of the film includes real footage – just as in real life the investigation of the accident has been followed by the majority of Poles through the news. This is why television reports were included in the editing.

KP: What about the budget of the movie compared to your previous projects?
PM: By and large the budget didn’t differ from the sums I have previously invested for single features. But please do not regard the 500 PLN (125 EUR) used to produce Zombielove as representative!

KP: Can you be more precise about you own investment?
PM: As with most of my previous features, Prosto z Nieba cost a few dozen thousand zloty. I still find it very hard to calculate the exact cost because I really do work for love. As usual the equipment was rent free. If I had to cover the full production costs, I would not be able to make the film.

KP: What is you distribution strategy for the film as a producer of Muflon Pictures?
PM: Sometimes our productions are distributed locally for theatrical release, with a part of them sold as straight-to-video movies or possibly to television channels. For this movie I have been lucky enough to obtain a theatrical distribution in Poland scheduled for the end of May 2011.

KP: Do you think it is possible to approach an event like Smolensk without bringing in political considerations?
PM: This film deals with that certain something that dies inside us when those closest to us pass away. The feeling of loss always raises new questions. Can we live with the hope that everything will be fine? And more specifically, how can continue thinking that we are not concerned with the things happening around us?

KP: Why did you opt for a fiction feature instead of a documentary format?
PM: I consider myself a feature film director. A documentary film always requires a basis of convincing data from which you can start. In this case, the result would have been a chaotic and unreliable documentary made up of unreliable half-truths. Besides, I have always liked to exert a certain influence in the narrative process.