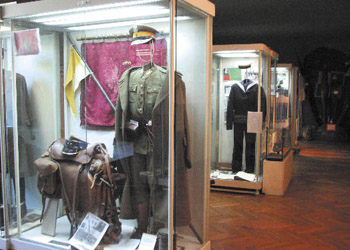 The Museum of the War Effort in Krakow’s Nowa Huta district houses a unique collection of objects donated by Polish World War II veterans and survivors. But the museum, like its ageing curators, may soon pass into the pages of history if new funding cannot be found.

The museum’s most famous possession is also one of the most striking landmarks in Nowa Huta – a 46-ton Soviet tank that stands in front of the building. For a while in 2007 the tank was the centre of public attention when it was taken away for renovation. At the time, the Krakow Veteran’s Organisation insisted that it should never be returned since, according to a then-recently passed bill aimed at removing Communist symbols from Poland, the tank was an illegal monument.

Support from Nowa Huta residents, who had grown used to their unusual street furniture over the course of 40 years, and other voices, ensured that the olive-green behemoth was soon back where it belonged.

Unfortunately, the same degree of support has not been shown for the museum itself. Running on a shoestring budget, it is maintained by subscriptions paid by the veterans themselves and voluntary donations from rare visitors.

The founders created the museum in 1968 to honour those who had put their lives on the line for Poland, and to make sure that future generations would remember their sacrifices.

“When the Nowa Huta district government donated the space for the museum, there was a hairdresser’s downstairs and a community centre upstairs. We were just given the building and expected to do everything for ourselves. That’s the way it still is today,” said spokesman Franciszek Baryła.

Among the most prized exhibits are two banners from pre-World War I Polish uprisings, parts of the Polish submarine Sep (Vulture) that a former crew member saved when the vessel was scrapped, and parts of Polish aircraft that saw combat during World War II.

The most poignant pieces on show are mementos from Nazi death camps. These include realistic miniature figures that show everyday life in the camps made by Zbigniew Baster and Jozef Pawlik – two artists who survived the experience.

Another emotive artefact is a Polish flag made in a death camp from scraps of red and white cloth. There are huge archives containing hundreds of wartime and post-war memories, many of them good enough for a Hollywood screenplay.

Unfortunately, no major government or museum institution is interested enough in these items to support the veterans who continue to safeguard these irreplaceable artefacts.

“Up until now the only reply we have received to our calls for support was a suggestion that we disassemble the collection and place individual items in various museums. That is the last thing we want to happen,” said Baryła.

City officials did not reply to an inquiry from the Krakow Post about possible help for the museum. Nor has there been any reply to a letter sent by the museum to mayor Jacek Majchrowski in February.

The Marshall’s Office has also shrugged off calls for support: “We already support 11 museums in the Malopolska region and cannot treat this museum as a special case,” said Piotr Odorczuk from the MO’s press office, while also pointing out that the museum is welcome to apply for MO cultural funds independently.

“Even if we knew how to deal with the paperwork needed to raise MO or EU funds, we wouldn’t be able to handle taking the necessary inventory. We have an average age of 84,” said Baryła, “We are no longer fit enough to handle everything ourselves.”

The museum has decided to apply for help with the inventory to the History Faculty of the Jagiellonian University and is still waiting for an official reply.

“If the situation does not change, within five years the museum’s collection might pass away, along with us,” concludes Baryła.

The Muzeum Czynu Zbrojnego w Krakowie can be found at os. Górali 23. Visitors are admitted by appointment only.