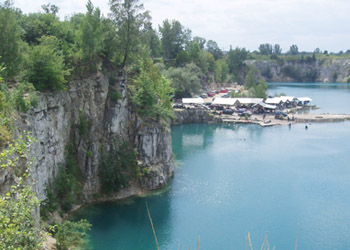 Plans for a new housing estate around Krakow’s scenic Zakrzówek lake have gained pace with an April court ruling that paves the way for a new road to the area. The road, Nowy Wyłom, is intended to connect the area, southwest of Podgórze, with the city centre. However, neither private landowners nor special interest groups have welcomed the decision.

“The road would be against the Krakow City Park investment concept and we have formally objected to such idea in the past,” said Piotr Cholewinski, spokesperson for Gerium sp. z o.o.

Polish-Portuguese enterprise Gerium has owned large parts of the land around Zakrzówek since 2006 and is planning to build luxury estates and a “Krakow City Park” in the area. Although agreeing that infrastructure needs to be put in place in order to make the land more accessible, Gerium sees no point in building the road so close to the lake.

Citizen group Zielony Zakrzówek has been one of the most vocal opponents of the plans for the area. Having opposed the building plans since they emerged in 2006, they have won victories and suffered setbacks. Last year Zielony Zarkowek won a crucial battle when the area surrounding the lake was given protected status. They see the recent decision as a potentially major disaster.

When the Krakow Post spoke to Michał Sczpakiewicz of Zielony Zakrzówek, he dismissed the idea that Gerium would oppose to the construction of a road leading past the lake: “The idea of a new road is actually exactly Gerium’s idea. The city may say that it’s their initiative, but it isn’t.”

Mr Sczpakiewicz believes that Gerium and the city government will both gain from the new road. He said: “The Nowy Wyłom road, stretching from Salwator southward, is not the best option for Gerium. But since the city is interested in building this connection, Gerium will accept it as second best.”

When asked why, if this is the case, Gerium would say that they were opposed to the road, Mr Sczpakiewicz said: “It is basically PR. They want to look good in the eyes of the citizens, but in fact this road is beneficial to their housing plans.”

We put this accusation to Gerium, but they deny they have a hidden agenda. Their press officer notes that the road would bother residents of their development, the park and its visitors and is, therefore, undesirable. Gerium also made it clear that the Krakow City Park is to be an open and public space, and not the secluded park for residents that some had feared.

Zeilony Zakrzówek is not convinced: “This is the beginning of the end. First there will be one house built, then another and another. Before we know it there will be cars and houses all over the place.”