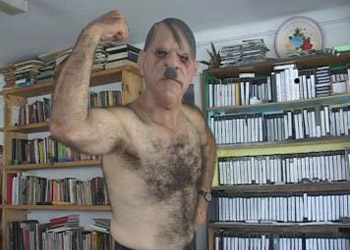 You’re nobody in the game of mini-break tourism if you don’t have a museum of modern art. I blame Bilbao. When that windy, mostly derelict city at the unfashionable end of Spain unveiled its plans to build a modern art museum that was, on its own, shiny enough and sparkly enough to persuade people to buy easyJet tickets and go there, every city government in Europe began jumping up and down and shrieking “Want one! Want one!”

It’s very easy to be rude about contemporary art, largely because we know that 90 percent of it will turn out to be rubbish from an historical perspective but can’t possibly tell which pieces of bicycle welded onto rhinoceros heads will be in the other 10 percent.

The greatest thing about contemporary art is that there is no shortage of it. It doesn’t matter how big your new museum is, or how many competitors it has, you will always be able to source sculptures of giant melted kitchen utensils or titanium trees bearing the socks of disposed Uzbeks or some other thing that makes people feel vaguely uneasy and guilty.

This, of course, is the principal reason that museums of contemporary, or modern, or current or modish art, are the fastest growing element of what I fear is probably referred to as the infotainment sector of the tourism industry. Try building a new museum of French impressionism or Italian masters. You can’t do it – the supply has dried up and the market is cornered. On the other hand, trying to imagine the limits to the supply of modern art is rather like trying to imagine the limits of the Internet – distant and faintly disturbing.

It was, therefore, inevitable that even stuffy old, nostalgia-wallowing Krakow was bound to end up with its very own glass and brushed-concrete museum of contemporary art. And so it has, in the form of the unimaginatively-named but sexily-acronymed MOCAK.

I haven’t been, but I have looked at the website – which is practically the same thing in the sense that it’s all achingly subtle typography, white space and inexplicable images. My prejudices were not shattered. The three headline photos feature some black gunk spilled on the floor, a man wearing a Hitler mask and a semi-naked chick in a library. As I said – it’s literally impossible to run out of this kind of stuff.

I’m aware I’m sounding negative, but that’s not my intention. MOCAK will be great for Krakow. It will rake in cash and make a lot of people happy. It’s also an excellent solution to the head-scratcher posed by the historically-significant but massive and empty remnant of the former Schindler Factory. Krakow has remade its scars as opportunities – not quite swords into ploughshares, but a post-modern equivalent.