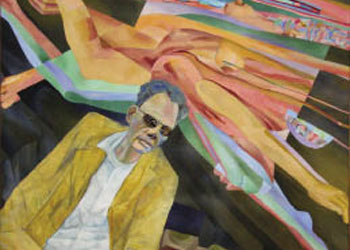 An old Jewish joke has it that a group of visitors to a small town approach the local rabbi and ask: “Can you tell us briefly about the situation in this town?” The rabbi shrugs and answers, “Good.” One of the visitors says: “Perhaps you could elaborate?” and the rabbi shrugs and answers: “Well, not so good.” The joke is easy-going at first bite and jarring on reflection, and in the same way, Bernard Aptekar’s new exhibition in Krakow is successively upbeat and critical, positive and wary.

Without attempting to digest a fifty-year career, this show combines several strains of Aptekar’s work: sculptures (or what Aptekar considers ‘sculptural paintings’), seriographs, old and new drawings and recent paintings. The exhibition represents the first independently curated show of contemporary art for the Galicia Jewish Museum, which is already well known for its cogent and acclaimed permanent exhibition, ‘Traces of Memory,’ and for its excellent educational outreach both to locals and visitors. Like ‘Traces,’ Aptekar’s show uses images as a way into historical consciousness,approaching shared experience by way of what might be called visual questions.

The son of Jewish immigrants to New York from Poland and Ukraine, Aptekar has long been known in the US as a dissident artist, spurning the dominant artistic movements of his times – Abstract Expressionism, Pop Art and Agit-Prop – while appropriating elements of each as necessary. Lucid and non-didactic, exuberant and impulsive, iconoclastic and parodic all at once, his sensibility draws deeply on the world of radical politics, in which criticism and creativity form two aspects of the same forward-looking, free-spirited phenomenon.

I hesitate to say that there is anything specifically Jewish about this sensibility, other than that it emerged as a defining aspect of Jewish modernity in Poland, Ukraine and New York alike, sometimes with and sometimes against the traditionalism with which many visitors will associate the Jewish ruins that appear with great tragedy in ‘Traces of Memory.’ What is it to be responsively beholden to history but not determined by it, and committed to changing it as a form of remembering? These are the motivating questions behind Aptekar’s art – questions that are authentically if certainly not exclusively Jewish in their import.

Something of Aptekar’s signature work appears in selected 1981 seriographs from The Defeat of the City of Plutonium, a sprawling allegory of the struggle for ethical purpose within a debauched civilization. The full scale of the work is indicated in the intricate accompanying pencil studies, which lure the viewer to ‘find’ the prints in the line drawings, and to imagine the un-shown whole from the dialectic of the studies and the framed works. Aptekar’s strategy with this work is a bold and also abrupt democracy of figuration, in which men and animals and machines are pressed into a strangely urgent and cartoonish jigsaw puzzle, all endowed with equal importance and equal lack of freedom from the collective. There is no centre to this amoeba-like civilizational complication, so that what is shown always seems like an excerpt of something larger. The effect is akin to squashing a colony of bugs or other living organisms decisively and with great force – in this case the bugs being the dynamic socio-historical whole to which all of us belong and which none of us can grasp – so that we can study a small, flattened aspect of its turbulence.

Just as the seriographs dilate the line drawings, they are also a preparations for a three dimensional rendition of The Defeat of the City of Plutonium, which can fairly be called Aptekar’s magnum opus – but not presented in this exhibition owing to its size. Instead, as a nod this achievement, and a bridge between the exhibition’s various parts, the interior of the exhibition space contains selections from Aptekar’s 1987–93 sculptural work, Dancing Translucent Tumblers, in which pastel-coloured headless and armless female figures cavort brightly and exuberantly. As buoyant as they are, to my eye, these figures point to a lacuna in Aptekar’s radical politics. At least as this show gives it, Aptekar’s universe is very much male-centric: the vile and the virtuous alike are men, and women are presented – tenderly, not crassly – as soulless pleasured bodies.

The exhibition’s central event is the series of homages to persons who might fairly be called Aptekar’s heroes, most of them American literati (Philip Roth, Joseph Heller, Kurt Vonnegut, Arthur Miller, J. Robert Oppenheimer) with a sprinkling of politicians (Mikhail Gorbachev, Barack Obama), among others. What Aptekar means by paying homage is not an idealizing gesture (which is not after all necessary to the honorific act), but an effort to register why these luminaries deserve their fame: they struggled with the social realities in which their lives were implicated, and in one way or another prevailed. Like the seriographs, the paintings retain a collage-like quality, in which figures find themselves in a floating universe, replete with counter gravities or no gravity at all: being suspended is a natural condition in these pictures, as is an all-over, nearly shadowless light.

In the case of the Oppenheimer portrait, actually a triple portrait, this suspended nature seems the analogue of the subject’s moral complications. Oppenheimer is not pictured as a genius in the thrall of high science (as he appears in a number of period photographic portraits), or as the broad-minded intellectual virtuoso that he was, or as the tortured, depressed soul that he also was, shouldering the burden of developing the most violent weapon ever known. Rather Oppenheimer is a purveyor of his milieu, standing in the midst of technological junk and connected by thought lines (perhaps his own, perhaps not) to a world of beautiful theory and decapitated heads. Oppenheimer’s triumph is that he remains a dreamer who neither disappears into pure reverie nor is fooled into believing that making things from dreams is the same as dreams coming true.

In the portraits of Barack Obama, made in the wake of Obama’s electoral victory in 2008 and 2009 (and both of which notably feature women as supporting figures), the burdens are plainer. In the portrait with Valerie Jerrett, Obama is far from a messiah figure, rather a trudging crusader whose face is illuminated with the colours of the whole rainbow; in the portrait with Michelle and the children, he is a humble man whose outsized hands – one acknowledging the unseen public, the other sheltering his family – do not quite admit what thoughts, visions and fears his bowed head holds. It will be interesting to see whether Aptekar continues to paint Obama, whose work as president has been deeply questioned by the left as well as the right.

Altogether, the Galicia Jewish Museum is to be lauded for a serious show that makes good on the museum’s ambition not just to preserve the Jewishness as a memory, but to explore with candour the diversity of the Jewish experience as a source of shared human challenges, of relevance to all people from all backgrounds.