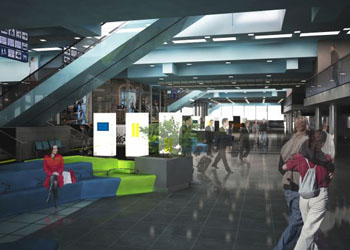 “The new Krakow main station will be the central point of a state-of-the-art communication hub combining railway, underground tram lines, a car park, the coach station and the airport in Balice,” said Łukasz Kurpiewski, a spokesman for Polish Railways (PKP) Group.

The EU co-financed project is a revival of a scheme that was abandoned in the 1970s. When the work is done the old station building will be taken over by the city, though it has not yet been decided if the space will be used as a business centre, art gallery or something else.

The first part of the works created minor inconveniences, but as the platforms and exits are closed, levels of frustration among passengers are rising, especially for those who use the station every day.

“The first day the works started I was rushing to the coach station exit and I almost crashed into the wall that had appeared there overnight. It almost made me miss my train,” says Anna, a commuter from Bochnia, east of Krakow. “It’s getting more and more bizarre every day. When they closed the staircase from the ‘Antresola’ passage to platform three, the only way to get to the trains stopping there was by lift! Imagine the people queuing for a small lift to make it to their trains on time. That’s common nowadays,” said one irritated passenger.

Since the closure of platform one, many trains have been switched to other platforms, causing great confusion among passengers. The other platforms will follow in due course, creating even more problems. However, the worst is yet to come: the station’s main entrance is due to be built in mid 2011.

“All information is displayed on yellow and black information boards and passengers are warned that their arrival or departure platform may change at any time. The parts of the station that are not undergoing refurbishment will remain open to passengers without further obstruction,” claim the Polish Railways authorities.

Krakow main station building was built in the 1840s and is just one of several historical train stations across Poland now being given a new look. By 2012, 980 million złoty will have been spent to make them functional and modern spaces with security cameras and wi-fi access.