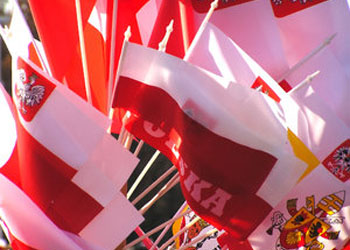 It is worth diverting slightly to tell the story of the three-day flag marathon that we experience each spring at this time. During the Communist era it was illegal to fly the Polish flag on any occasions other than state holidays (and always illegal to fly the version with the coat of arms).

The prime reason for this was the unfortunate proximity of the 3 May anniversary of the signing of the Polish Constitution of 1791 to the Soviet-backed Mayday holiday on 1 May. Poles being Poles were inclined to put their flags out on the 1st and then ‘accidentally’ forget to take them down again before the 3rd.

Constitution Day was reinstated in 1990, but it remained illegal to fly the flag on days other than state holidays, which meant, technically, than Poles had to put their flags out on the 1st, take then down at the stroke of midnight, and then put them back up the next night. It’s hard to imagine a more perfect example of kinked institutional thinking and the response of the average Pole is easily imagined.

All this was solved with the introduction of Polish Flag Day on 2 May, which had the added advantage of turning a day that most Poles took off anyway into a sort-of unofficial holiday. The other thing it solved, or at least ameliorated, was the spate of seasonal injuries stubbornly associated with flag raising. It can be a dangerous business, especially when carried out by the pot-bellied older gentlemen who make up the majority of building administrators.

The average 30 April is a carnival of rickety ladders and chaps hanging out of windows with other chaps holding onto their ankles – it’s an unofficial slapstick festival that deserves to be on the tourist calendar just as much as that tomato-throwing business in Spain. The risk of being crushed by a plummeting middle-aged Pole with a fag end hanging out of the corner of his mouth is well worth it.

Before I sign off and ready my protective headgear I must point out that we have a new columnist in the paper this month – turn to page 6 to read Tales from the Chalkface written by Chris Riley. It’s about time the Krakow Post did something to address the experience of the vast hordes of teachers among our readers, and I think Chris will make a fine job of it. On the subject of the new, Kino Mania – a regular feature about Polish cinema – has also come among us.