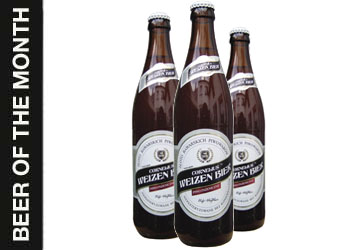 There have been rumours that Beer of the Month is nothing more than a transparent attempt to blag free beer from innocent brewing companies. I couldn’t possibly comment on that, but I will say that the eight bottles sent to our offices by the Eco-Frontiers Ranch were accepted in the spirit of friendship that was intended and will in no way induce me to mention their website, www.ecofrontiers.net.

It was stunningly delicious stuff and just makes you realise how good the Polish beer you find in pubs could be. The only bad thing about Eco-Frontiers Ranch’s (which, I believe I heard, is located in the Bieszczady Mountains) beers, is that you can’t buy them. You have to take a holiday there, which appears to involve a lot of strenuous messing about with horses, barley and other heavy things.

Meanwhile, on a dark street in Krakow, three grown men were messing about on a woman’s bicycle and giggling a lot. It was a transitional stage in this month’s Beer of the Month journey, and not one I was convinced we would survive. It wasn’t the fact that it was a woman’s bicycle that worried me, it was the fact that we were riding it in the dark, without a light and under the influence of part one of Beer of the Month jury duty. High pitched arguments about whose turn it was next seemed certain to attract the attention of law enforcement and a hefty fine.

Unusually for the Beer of the Month jury, a female was present (which goes some way toward explaining the bicycle). One of the advantages of females, apart from their access to bicycles, is that they sometimes make you try things you wouldn’t otherwise. I’m thinking primarily of pastel shirts and Polish wheat beer. Unlike pastel shirts, Polish wheat beer turns out to be very good indeed, hence this month’s choice: Cornelius Weizen Bier.