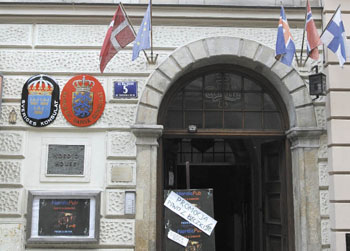 A year ago it emerged that some officials at the Małopolska Regional Office were critical of what they considered to be an unfair deal struck for a sought-after piece of real estate in central Krakow. The building at Sw. Anny 5, known as Nordic House, is occupied by the Swedish and Danish consulates, the Scandinavian-Polish Chamber of Commerce as well as a tourist centre, a pub and a conference hall. Critics suggested that the rent being collected for the property was too low.

A couple of weeks ago the legality of the Nordic House contract was once again questioned by Kazimierz Czekaj, a representative of the regional office. Mr Czekaj told Gazeta Wyborcza that the tenants of Sw. Anny 5 were renting the four-storey building at an unreasonably low price. Furthermore, he claimed that Nordic House did not fulfil the conditions of the contract, specifically because the building was meant to be used for the advancement of cultural and business relations between Scandinavia and Małoposka. Instead, Mr Czekaj suggested, the property had been turned into a private enterprise and the contract should, therefore, be renegotiated.

When the Krakow Post visited Janusz Kahl, the Swedish and Danish Honorary Consul, he was careful to point out the leaflets, brochures and information about both Scandinavian and Polish points of interests that stand on display in the entrance to his office. The room is bright and spacious, the white walls are decorated with images from the region and behind his desk hangs a portrait of the Honorary Consul himself.

Mr Kahl moved his enterprise to the building at Sw. Anny in 2002. At that time it was a rundown school of nursing, he tells the Krakow Post. Finding it a spacious location a stone’s throw from the main square and suitable for his expanding venture, Mr Kahl signed a 20-year-contract with the Małopolska regional government.

“Renovation was required in the contract. We spent about two million złoty to rebuild the whole place,” Mr Kahl says. He shows us the contract where all the inventories are listed. They refer to a wide range of enhancements, including the installation of solar panels on the roof of the building.

The contract also included details about what the property could be used for – specifically cultural and business relations between Scandinavia and the Małopolska region. Mr Kahl stresses that all of these conditions have been fulfilled, referring to several cultural events that take place in the building including lectures, exhibitions and meetings. Asked what the next event would be, he mentions the inauguration of the Finnish consulate, which is to open in the same building in May.

The position of honorary consul should not to be equated with that of ambassador. An honorary consul typically has few formal diplomatic duties and does not generally receive payment from the country he represents. Consequently, honorary consuls often combine their duties with their own commercial enterprises.

“I do it because I want to help,” Mr Kahl replies when asked why he has volunteered for two honorary consular positions. This will soon be boosted to three when he is formally appointed Honorary Consul of Finland.

One of the criticisms levelled at Nordic House is that the building includes a sushi bar, which can hardly be considered a representative of Scandinavian culture. In response Mr Kahl points out that the sushi restaurant is a sub-tenant of his and that this is permitted in the contract. “If we hadn’t been allowed to let space to other vendors I probably would not have rented the building in the first place,” Mr Kahl notes.

The Krakow Post has heard off-the-record speculation that the fuss over the Nordic House contract may be part of jockeying for position among regional politicians, but Mr Kahl refused to be drawn on the subject. “The case has even been examined by the CBA (Poland’s Anti Corruption Bureau), and they found nothing wrong,” Mr Kahl concludes.

One thought on “Foul Play at Nordic House?”