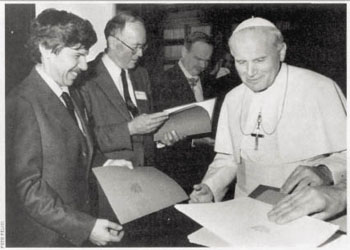 On the evening of 2 April, 2005, Krakow was illuminated by candlelight pouring from the windows of homes and shops across the city.

The ancient institution of the Roman Catholic Church had utilised the technology of the 21st century to co-ordinate a global vigil, sending text messages alerting the faithful that Karol Jozef Wojtyła, known to the world as Pope John Paul II, was dead.

It was not long before the private mourning of Cracovians spilled out onto the streets. Within hours, ul. Franciszkańska, where Pope John Paul II had chatted with the public from a window during his visits to Krakow in 2002, had become a virtually impassable sea of candles and flowers. As the world grieved, it seemed that Krakow was the keening heart that wept for the loss of its beloved ‘Wujek’ (Uncle).

It is certainly no exaggeration to say that the city has always thought of John Paul II as one of its own. Although he was born 30 miles away in Wadowice, it was in Krakow that he understood his call to the priesthood and it was here that he lived, worked and studied for many years. The touch of the then manual labourer who took his first step towards sainthood when he banged on the door of the Archbishop of Krakow in 1942 can still be felt at numerous sites across the city.

Karol Wojtyła moved to Krakow in 1938 as a student at the Jagiellonian University. A year later the Nazis closed the university and deported many of its students and professors to Sachsenhausen concentration camp in Germany. Karol, then 19, took up a variety of anonymous jobs in order to avoid the same fate. He had always been a keen athlete, so the prospect of hard work at the Solvay factory, near Borek Fałęcki just south of the river, was no hardship for him. Neither was a dynamiting job at the limestone quarries of Zakrzówek, now a popular destination for nature lovers, on the edge of the Ruczaj estate.

He only narrowly avoided arrest and imprisonment in 1944 when the Gestapo, alarmed at the prospect of an uprising in Krakow similar to the one that had taken place in Warsaw, indiscriminately raided homes and seized 8,000 of the city’s able-bodied males. Wojtyła was hiding in the basement of his uncle’s home on ul. Tyniecka as soldiers ransacked the upper part of the building during that ‘Black Sunday’ raid. He was later sheltered in the Archbishop’s Palace.

The Catholic Pages notes that, as well as being a scholar and an athlete, Wojtyła was also fond of drama and was a member of Krakow’s underground Rhapsodic Theatre while still a student in the city. After the war, he returned to the seminary and was ordained a priest in Krakow on 1 November, All Saints’ Day, 1946. This event marked the beginning of a time of travel for the young priest. He was sent to Rome to study for his doctorate and worked with Polish communities in France, Belgium and Holland.

His return to Poland in 1948 saw Wojtyła installed as a parish priest, first in the village of Niegowić and later at St Florian’s in Krakow. In the city, he continued to study and it was not long before he earned the title Professor of Moral Theology at the seminary here. His career in the church was blossoming too; first he was appointed Auxiliary Bishop, in 1958, and then Archbishop of Krakow, on 13 January 1964. Three years later – and 25 years after the young scholar had knocked on the Archbishop’s door in Krakow – he was made Cardinal.

The area of the Solvay factory where Wojtyła had worked is now a busy, developing suburb of Krakow, hallmarked by shopping malls, new residential buildings, and an arts centre. Close to the Solvay tram stop is the Sanctuary of Divine Mercy at Łagiewniki, now a site of pilgrimage for two million Catholics each year. It contains the icon painted by Sister Faustyna Kowalska in the 1930s after Christ appeared to her and told her to create the image and to spread the word of Divine Mercy. The painting has been copied many times, but because the original is in Krakow – and because Sister Faustyna is buried at the convent in Łagiewniki – it has become one of the most important centres of Catholic pilgrimage in Europe. The modern complex, which includes St Faustyna’s original convent, was consecrated by John Paul II during his 2002 visit.

John Paul II stayed at the Archbishop’s Palace during his 2002 visit, the starting point of his spiritual career and, when he was Cardinal, his home. The window, at number 3 ul. Franciszkańska, was where he stood to address crowds of followers during that visit nine years ago, and it now features a permanent life-sized photo of the Pope with his right hand raised as if in a blessing.

A short walk from Franciszkańska is the archdiocese museum, spread across two buildings at 19 and 21 Kanonicza Street, where Wojtyła lived, first as a priest and later as a bishop. The building is a shrine to the memory of John Paul II, and draws many thousands of tourists and pilgrims each year. It contains gifts presented to the Pope, as well as religious art and artefacts.

For many Cracovians, the time that Karol Wojtyła spent in the city as a priest remains as significant as his 23-year reign as Bishop of Rome. In particular, he is remembered for his common touch. One story illustrating this arises from the custom of kolędą – when priests visit parishioners in January each year. During one such visit, Elizabeta Nowak welcomed him into her home at ul. Rogatka. It was a building that Wojtyła would have known from his early years in Krakow – Wehrmacht soldiers were billeted there during World War II. Elizabeta’s niece Anna recalled that her aunt met Wojtyła again when he was Pope; she was delighted that he remembered her from the kolędą visit years earlier.

Neither did high spiritual office diminish his natural rapport with the faithful. Every time the Pope visited Krakow, he exchanged banter with the crowds of youngsters and students that gathered beneath his window, often late into the evening and despite his light-hearted pleas that he be allowed to go to bed. His mass on Błonia common during his last visit in 2002 drew a congregation of two million.

In fact Błonia has hosted many mass gatherings to celebrate the life and death of Pope John Paul II. When Mehmet Ali Agca shot John Paul four times in St Peter’s Square in Rome, in May 1981, thousands marched to the field in silence wearing white. On 4 April 2005, two days after his death, another march was held, again in silence and again attended by mourners in white. In all, around a million visited Błonia that day, and the site became a focal point for a city in mourning until his funeral on 8 April.

On Błonia, in churches and in private, Cracovians paid their respects. Pictures of John Paul II, flowers and candles were in windows everywhere. Even the bitterest enemies came together, as supporters of both Cracovia and Wisła football clubs put aside their differences to pray and mourn in unison.

For Catholics who cannot get to Rome for John Paul II’s beatification ceremony on 1 May, Krakow is the obvious alternative destination. Wadowice too will get its share of public attention, and the Pope’s birthplace museum there, on ul. Kościelna, will no doubt receive more than its usual 200,000 or so visitors this year.

Those who come to Krakow to mark the occasion will find memories of Pope John Paul II everywhere. From the yellow and white flags of the Vatican – which will fly alongside the Polish flag and Krakow’s own blue and white – to the permanent monuments and plaques around the city, at Wawel, St Mary’s, Łagiewniki, Jordana Park and others, nobody will be left in any doubt that the man who was born 30 miles away and became the Vicar of Christ was and will always be one of Krakow’s own.