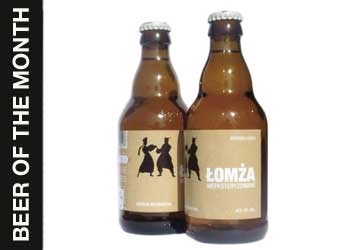 Last week I wrote a column for Wirtualna Polska that was intended to put a rocket up Poland’s brewing industry and its appalling mass-produced beers, for which I invented the cunningly litigation-skirting term ‘Tyskwiec.’ It attracted over 900 comments in a few hours. Even if you filter out the ones simply inviting me to get back to where I came from, which are inevitable even if I write 10,000 words explaining why Poland is peerless among the nations, that shows a surprising level of interest in the resurgence of real Polish beer.

As blessed Cracovians we have access to several pubs specialising in excellent local beers from small Polish breweries (the names and addresses of which I will be providing shortly after I receive the requisite cash-stuffed envelopes). But what about the poor souls living in benighted hellholes like Warsaw? How can they get a taste of the good life?

Operating solo and unsupported by the Krakow Post’s elite tippling cadre, I went to the supermarket to see what was on offer in the beer aisles. Squinting in the unaccustomed brightness, I was pleased to discover some promising brands among the ranks of awfulness. Browar Amber’s Piwo Żywe, winner of the very first Beer of the Month, was there in respectable numbers for example.

A lot of commentators suggested I try Kasztelan Niepasteryzowane and Perła Niepasteryzowana, often suffixing their advice with the Polish equivalent of ‘immediately, dumb ass.’ So I did. Neither floated my boat. They’re a bit better than the cursed Tyskwiec, but nothing to write home, or indeed to the Krakow Post, about.

What I did find interesting was Łomża Niepasteryzowane (all these beers are ‘niepasteryzowane,’ unpastuerised, which conveys the comforting information they have been nowhere near French microbiologists). I hesitated about choosing the Łomża as BOTM, because it comes from Poland’s fourth largest brewery, but it is worth a taste and hopefully represents a trend in big-brewery production.

The Łomża is another example of the disappearing taste phenomenon I’ve mentioned before. In this case though, it’s an interesting rather than an annoying characteristic. It’s whatever the opposite of that thing is that makes a glass of cold white wine bite into your tongue. It seems to be a Wielkopolska thing and is probably something to do with funny water.