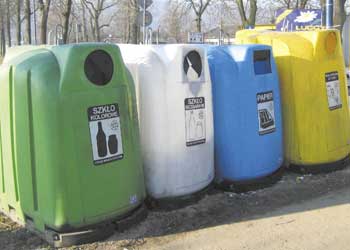 For visitors from countries where the recycling of household waste is now the norm, Krakow’s public recycling facilities seem scarce. What is the city doing about recycling?

The principal landfill site serving Krakow has been located in Barycz since the 1970s, but space is expected to run out in 2016. An 18m euro state-of-the-art recycling sorting facility, funded by the EU (62%) and the city of Krakow (38%), was brought on line at the Barycz site in 2006.

Krakow now recycles approximately 10% of its household waste – roughly 65 tons of municipal waste is sent for recycling daily, while 650 tons is sent to landfill. A similar national figure places Poland towards the bottom of EU recycling performance, along with other former Eastern Bloc countries.

Of the material sent to Barycz for sorting, 75% is re-sold, 22% is sent to a local cement factory where it is burned as fuel and 3% is reclassified as trash and ends up in landfill.

Poland has committed to meeting some stringent EU recycling regulations and faces hefty fines if it fails. In 2011, Krakow must be collecting 25% of its biological waste fraction for composting. By 2015, the EU Waste Framework Directive requires all member countries to enforce the separate collection of recyclables (paper, metal, plastic and glass). By 2020, 50% of all municipal waste must be recycled.

The paper, metal, plastic and glass that is currently being recycled in Krakow originates largely from the 600 sets of public colour-coded recycling receptacles distributed throughout the city. These points are serviced by MPO, a co-operative enterprise that has held the city trash contract for the past four years. The location of some recycling points has been controversial, and many bins have been removed after complaints from residents.

The city authority overseeing waste collection has decided not to install segregated street bins in the Old Town area on the grounds that they would not be in keeping with the historical image of important tourist sites.

The door-to-door collection of household recyclables has also begun in selected Krakow neighbourhoods served by MPO and other waste collection companies such as Van Gasewinkel, Sita, Asa Eko and Remondis. In total, there are a reported 17 municipal waste collectors operating in Krakow; however, MPO has approximately 60% of the city’s waste collection market.

Pick up is free, as long as the waste is clean, larger than four centimetres and placed in the designated plastic recycling bags. Door-to-door collection by MPO is available for single homes and apartment complexes throughout Krakow, and requires only that a trash collection contract be signed. Other trash collection firms operate similarly. Details are available on MPO’s website: www.mpo.krakow.pl.

Poland and Hungary are the only countries in the EU that have not adopted a law making the state the legal owner of municipal waste, and therefore responsible for its disposal. Technically, there is no legal requirement for the state to arrange for the collection of household waste at all. However, current Polish legislation aims to change this. A Polish bill modelled on the EU Waste Framework Directive 2008/98/EC has been passed by the Sejm and is currently waiting Senate approval. The Minister of the Environment expects this new waste legislation to be passed into law within 2011.

And what happens when the Barycz landfill is full in 2016? A new incinerator for municipal trash is projected to come on-line in Krakow in 2014. KHK (Krakow Holding) is currently looking for a suitable location in Nowa Huta.