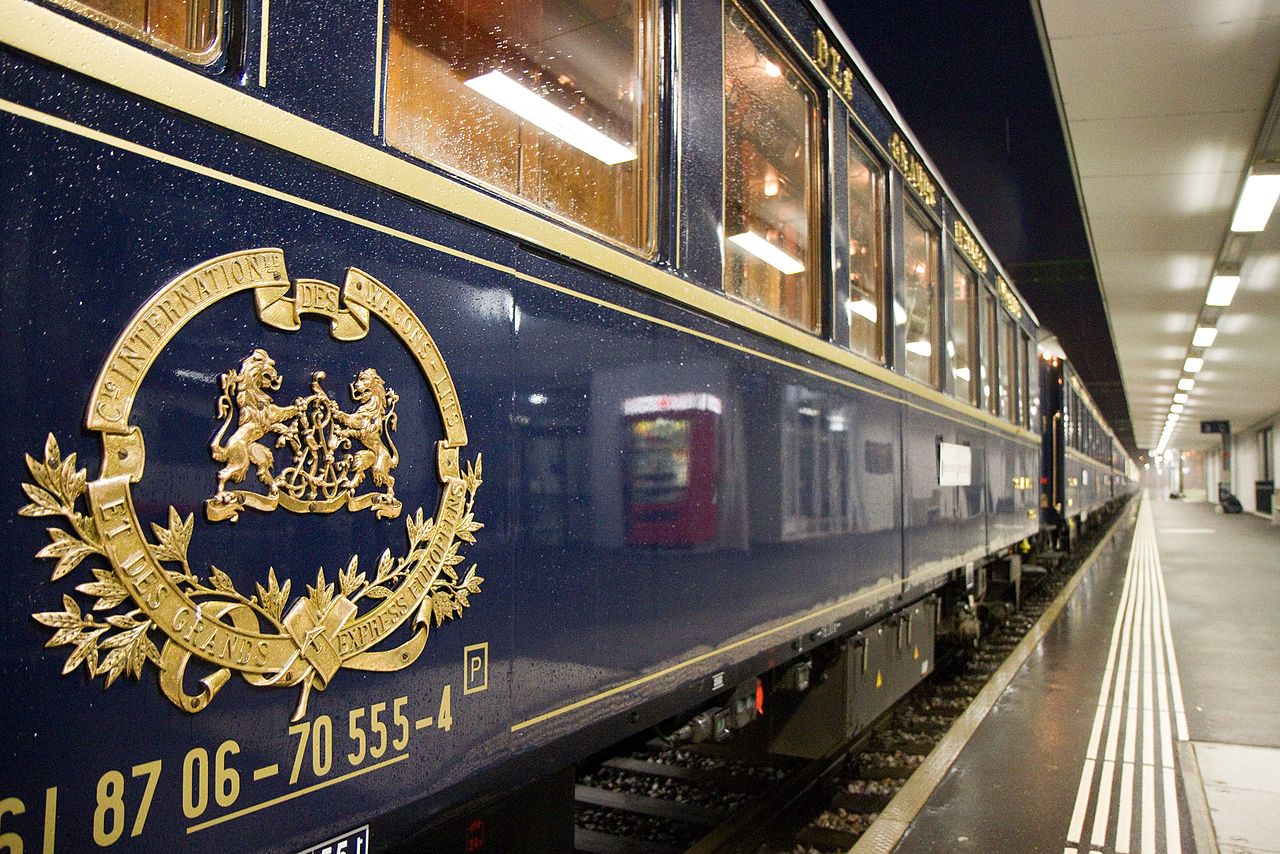 Last week, the luxurious Orient Express made a maiden two-day scheduled stop in Krakow. Well, not quite. The train that pulled into Krakow Głowny Station at midday on Thursday was the Venice Simplon-Orient Express, a reconstruction of the legendary ‘Train of Kings’, painstakingly pieced together and refurbished 25 years ago by American tycoon and rail enthusiast, James Sherwood.

The original Orient Express, which was launched in 1883, ran a service from Paris to Giurgiu in Romania, passing through Strasbourg, Vienna and Budapest en route. Passengers wishing to go on to Constantinople (now Istanbul) had to catch a ferry, but within a few years a direct rail service to Constantinople was made available, thus linking the familiar West to the Orient, whose mysteries so fascinated artists and intellectuals of the time. Agatha Christie captures the excitement of the trip in her book, “ Come, Tell Me How You Live”, in which she describes the train ‘swaying, rattling and hurling one from side to side in its mad haste to leave Calais and the Occident.’

After the service disruptions caused by the Second World war, the route was faced with mounting competition from fledgling passenger airlines able to offer a faster and cheaper alternative to the long trek across Europe by rail. The operation finally folded in 1977.

This is where James Sherwood enters the picture. After successfully bidding for two original 1920s carriages at an auction in Monte Carlo, he decided to trawl Europe for other specimens. His tenacity and patience paid off, and he was eventually rewarded with the acquisition of seventeen carriages in various states of neglect. After reconstructing and lavishly refurbishing the carriages, Sherwood was ready by 1982 to re-launch a service from Calais to Venice via Paris. He wanted to use the name ‘Orient Express’, but the French refused to grant him permission, because there is a service of the same name running between Paris and Vienna. So Sherwood’s consortium adopted the name, Venice Simplon-Orient-Express.

Once a year, the Venice Simplon has been running a nostalgic service to Istanbul, but this year, the company decided to run a special route to an untried destination. After Krakow was selected as the focus of the tour, the other destinations, which include Warsaw and Malbork Castle in the north of Poland were chosen. Malbork Castle was built in the 13th Century by the Teutonic Knights. Piotr Smagur of Intercrac, the agency responsible for the Polish leg of the tour, reminded me that the Teutonic Knights had their base in Venice. This is also where the 102 American, British, French and Brazilian passengers that arrived in Poland on the Orient Express actually started their trip, later stopping off at Vienna and Banska Bystrzyca in Slovakia before crossing the Polish border and heading for Krakow. The final leg of the journey took the train to Prague.

The tour has been billed as “Slavic Dream” by some of the local media, but this is somewhat misleading, as, apart from the Malbork-Venice link, little attempt has been made by the organisers to make cultural or historical connections between the various stop-off points. The trip was in fact sold as the “Grand Central European Tour” and its primary purpose was to mark the 25th Anniversary of the re-launch.

“We didn’t want to bring too much attention to the Anniversary of the re-launch, because people know the Orient Express has existed for over 100 years, but for us this anniversary means everything,” Piotr Smagur explains.

Intercrac’s involvement in the Grand Central European Tour started with an unexpected phone call from the Orient Express offices in London. The caller announced that Venice Simplon-Orient-Express wanted to run a special service to Poland and asked if Intercrac would be able to help them organise everything.

“They were looking for something new, which would be interesting for their passengers and their network, something fresh in this part of Europe which was still not very well known.”

Intercrac specialise in the upper end of the market and have organised numerous trips before for VIPs and royalty, in fact just the kind of people who have traditionally travelled on the Orient Express. In the early days, as well as carrying royalty, the train passed through a series of monarchical states. Some of these monarchs could be tricky customers. Most famously, Boris III of Bulgaria, who was barmy about trains, refused to allow the Orient Express to pass through his territory unless he was allowed to drive the locomotive.

Two representatives flew over from Orient Express to Poland and toured the country with Piotr Smagur to find suitable stop-off points besides Krakow, which was first choice, not only because of the beautiful historical centre, but also because attractions like Wieliczka Salt Mines, Oswiecim and Zakopane are easily reachable. Warsaw, as the capital, was an obvious choice, but the Orient Express representatives were also keen to include a trip to the narrow Hel Peninsula on the Baltic. Unfortunately, their efforts were flummoxed by insurmountable technical problems. They were also anxious to ensure that the passengers would get pleasant views of the surrounding countryside as the train flew past, so tried to choose a picturesque route.

It is likely that the Orient Express never visited Poland before her accession to the EU in 2004, because the owners viewed the country as inaccessible and remote. It is also likely that the communists who seized power after the Second World War would have anyway disapproved of any overtures from the train company. According to Piotr Swagur, Orient Express might also even have doubted whether Poland would be capable of handling such a demanding undertaking.

“Maybe they were not very convinced that we were able to take over the train, to take care of the train.”

But thankfully times have changed. The Orient Express was pulled into Krakow Glowny by a powerful freight locomotive provided by the Polish Rail Authorities (PKP) for an undisclosed fee.

Life on board the Orient Express has entered folklore. Italian waiters, French chefs, leather upholstery, sumptuously prepared dishes washed down with champagne, staff available 24 hours a day at the ring of a bell. These are the obvious luxuries. But Piotr Swagur was anxious to make clear that the passengers rarely slip into a sleepy routine crudely interrupted by meal breaks and stop-overs. Every passenger is treated personally and encouraged by the staff to make personal choices about how they spend their time.

But what about entertainment? Everybody knows about the piano bar, but are there any other ways of providing entertainment in such a confined space? Here, Piotr Swagur admitted that the Orient Express were having some problems coming up with fresh ideas in keeping with the 1920s interior. Anything high-tech is naturally out.

A member of staff did however come up with a brainwave a couple of days before the train reached Krakow. A musician playing a traditional Slovakian flute-like instrument, which is on the UNESCO World Heritage List, was invited to walk up and down the train entertaining the guests. He concluded his performance, naturally enough, by jamming with the pianist.

When the train arrived in Krakow, a huge crowd of journalists and curious Cracovians turned up to see the staff and passengers disembark and get a glimpse of the sumptuous interior. But they were disappointed. Security was very tight. One curious bystander who dared to get too close was over-zealously thrust back into the crowd by the nape of his neck. The passengers were meanwhile whisked off to horse-drawn carriages for a tour of the Market Square. This ultra-efficiency caused outrage. “Orient Express not for Cracovians” screamed the headline in the Wyborcza newspaper.

This claim to ownership seems rather premature. It is difficult to understand why anybody would want to peel away the sense of mystery that this train patently still exudes. This train was after all favoured by real spies and fictional murderers. But times are changing. The quote from The Daily Mail, which is posted on the lead page of the Venice Simplon-Orient-Express website, makes this crystal clear : “For bragability, there is nothing to beat a journey on the legendary train.”

Anyway, Krakowians might have more of a chance in the future to bathe in the glow of the myth that is the Orient Express. Diana Minelli from Venice Simplon-Orient-Express has made it clear that the train will definitely be visiting Krakow next July. Piotr Swagur is even more optimistic. He cautiously hopes that this trip will prove to be such a success that Krakow will become a regular stop-off point for the “Train of Kings.”