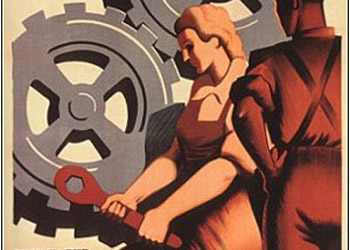 Valentine’s Day has been and gone… but just when you thought it was safe to go back into the florist, along comes International Women’s Day.

The event, on 8 March, is now in its 100th year. Although it is an internationally recognised date, visitors from Western Europe, the US and other parts of the world won’t be as aware of it as anyone from Eastern and Central Europe or Russia. This is because it was strongly supported by Communist governments in this part of the world — female factory workers were feted with flowers every year to mark the date.

International Women’s Day (Dzień Kobiet) was first observed in Germany in 1911. It was intended to highlight the social and economic problems of women in a world that was becoming highly industrialised. German socialist politician Clara Zetkin suggested the event at a meeting of the Second International in Copenhagen in 1910, though no date was specified. It was recognised in Russia following the October Revolution, but did not become a holiday in the Soviet Bloc until 1965.

These political roots are losing ground to commercial exploitation. Just as they have recognised the opportunities of occasions such as Valentine’s Day and Halloween, companies in Krakow are keen to cash in Women’s Day. Hotels, restaurants, clubs and bars are offering a variety of deals, promotions, and two-for-ones in order to get men and their partners through the door and spending money.

The Krakow Post notes that, far from the spirit of Women’s Day, it is common to find Krakow companies – mostly on the Gumtree website – advertising ‘women only’ jobs. These offers are mostly from bars and restaurants brazenly – and illegally – requesting female applicants for serving and waiting posts.

Instead of a romantic meal, a more appropriate celebration of Women’s Day in the spirit of its founders might be to complain to these would-be employers. The limousine stuffed with roses and diamonds will be just as well appreciated on the 9th.