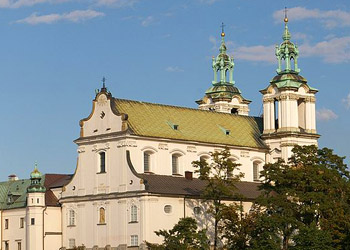 I had always assumed that when I was finally elbowed off this mortal coil there would be a straight-up fight between Westminster Abbey and Skałka for my ancient yet remarkably beautiful corpse. My plan had been to stipulate a fifty-fifty split so as not to cause disappointment. This may have been a hasty decision — apparently neither venue has the room. Westminster Abbey has been full for centuries and is currently only accepting celebrity ashes, and now I discover that Skałka is also chock-a-block.

I’m a bit confused about how these places decide when they are full. The last person interred in Skałka was Nobel laureate Czesław Miłosz, but that was almost seven years ago. Surely they knew then that he was the last man in, unless he somehow got bigger postmortem. The only possible candidate since then has been Lech Kaczyński, who was never going to be an easy sell. Did the Skałka management decide at that point that they were full: “Sorry. We couldn’t possibly fit another one. Try the big place on the hill.”

The proposed solution to the no-vacancies situation at Skałka is to build a new pantheon (the Panteon Narodowy) here in Krakow under Sts. Peter and Paul Church on Grodzka. In accordance with Polish tradition, half the nation expects the structure to collapse almost immediately, while the other half is cheerfully contributing yah-boo-sucks comments under online stories, possibly while humming ‘We don’t need another hero.’

It has to be said that planning to build a new pantheon for future heroes is a gutsy act of optimism. I can’t imagine something similar happening in the UK. Building a pantheon for national heroes implies, of course, that there will be future heroes. What isn’t clear to me is how Poland is going to agree on who these heroes are. Kaczyński’s death was so divisive that it must raise questions about the likelihood of any Pole, no matter how talented or heroic, getting the vote of the majority. Even the interment of Miłosz, a bona fide internationally lauded cultural figure, in Skałka raised howls of protest from sections of Polish society. Is there anybody alive at the moment who most Poles would label pantheon-worthy?

While I’m on the subject of death and demise, the ongoing row about machine-made obwarzanki also strikes me as thought provoking. In case you haven’t yet read our cover story, let me summarise: since October of last year an obwarzanek krakowski can only be called an obwarzanek krakowski if it is made according to EU-approved traditional methods, which means by hand and not by machine and within Krakow’s city limits. I’ve always believed that the only people who eat them are tourists and locals with a masochistic sense of civic duty, but apparently tens of thousands of them are made every night.

The major problem with obwarzanki is that, being a rapidly-hardening bread product, they are impossible to export to anywhere more than a couple of hundred kilometres away. Now it is also impossible to make them anywhere else. Can someone explain to me how this helps?