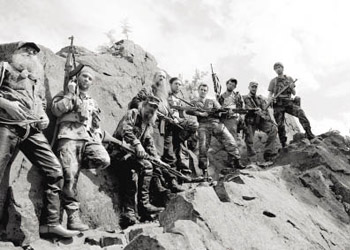 Become a Legionary’ is not the ironic title of the latest highbrow work of conceptual art, it’s the name of an indoor play area encountered by visitors just before they enter ‘The Gay, the Innocent and the Heartless’ — a photo series by Zbigniew Libera on display at the Gallery of Polish Arms and Uniforms on the first floor of the National Museum until the end of March. The museum acquired the work of the controversial Polish artist to celebrate the fifth anniversary of the reopening of the 20th Century Polish Art Gallery. The curator is Dominik Kurylek.

In the ‘Become a Legionary’ playroom, which is intended to make a visit appealing for the whole family, children can wear green helmets and take up plastic arms to play among fake trenches and non-barbed wire. Though not obviously educative, the temporary enlistment of sons as patriots gives parents an unexpected moment of respite.

For adults, the ‘Became a Legionary’ area subtly sets the tone for Libera’s artwork — it forces the visitor to think about the violence confronting children in our society. As visitors wander through rooms stuffed with arms and armour, the machinery
of past warfare made safe behind glass and the intervening centuries, they might be tempted to ask themselves: “If we bring our children here, should we also take them with us when we visit Auschwitz or Majdanek?”

Visitors are gently required to take a playful approach toward art. Libera himself has adopted a similar attitude since the spring of 1982 when he had his first solo show at the clandestine Strych
Gallery in the post-industrial city of Łódź. Located in a sombre loft off ul. Piotrkowska, Strych Gallery was a space in which to share the illegal or illicit material leaking from Warsaw, but also one of the main venues responsible for re-infusing the Polish artistic scene with a Dadaist mood.

The art group Łódź Kaliska figured for a while among the regulars of the attic on Piotrkowska. Their Duchampian approach in the use of photography, experimental film and performance art influenced Libera and a whole generation of artists who were occasionally sent to prison for creating and distributing subversive papers under Martial Law. Libera’s new exhibition bears witness to a new direction in his work — the debunking of conventional images produced by mass culture.

Since ‘Positives’ (2002–03), a series of tricky images that transformed war atrocities into flashy positive versions, it seems that Libera has tried to shake off his “toymaker of cruelty” reputation. This is an uncomfortable label he has acquired after the creation of ‘LEGO Concentration Camp’ (1994) — a disturbing reproduction of an anonymous gulag using the ubiquitous children’s building blocks.
Since then, Libera’s name has often been associated with the circle of ace firebrands that includes names such as Damien Hirst and Maurizio Cattelan.

For his latest work Libera has created a multi-media reportage spoof using photography and fragments of literature taken from Che Guevara and William S. Burroughs. The ‘story’ follows an unidentified squad of inglorious basterds lost in a nowhere banana state. The impression of reality is reinforced through a fake hand-written diary detailing the guerrillas’ exploits, along with a fictional National Geographic article documenting their mysterious expedition.

The show successfully brings into question the manipulation of violence by the media and asks us to question the influence of the idea of patriotism as a moral value — something we are subjected to from earliest childhood. All you have to do to master Libera’s game is just put down your plastic gun once and for all.