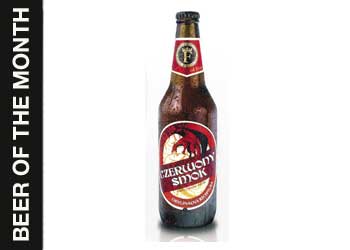 The Post’s crack beer-tasting team went to some dark and alarming places this month – and I don’t just mean the bars. For the first time in this epic journey, we wondered if we were going to make it. The lowest point came when we had two rounds in succession that nobody could finish. For the Krakow Post beer jury, half-a-dozen unfinished and undrinkable beers on a table is the equivalent of a captured Legionary standard or sheathing a sword that has not tasted blood.

This is not Worst Beer of the Month, but I must warn readers about a bizarre specimen we stumbled across called Ale Ale. We couldn’t figure out if it was ‘ale’ in the English sense of ‘sweet malted barley beer’ or in the Polish sense of ‘but.’ Either way, a beer called ‘Ale ale’ or possibly ‘But but’ had to be worth a try. It wasn’t. It turned out to be the archetype of a familiar family of Polish beers with a startlingly unpleasant taste that almost immediately vanishes from the tongue. The taste evaporates so rapidly that you have to have another sip just to check it really was as bad as you thought it was. It is.

The beer gods were not with us that night. We stumbled randomly from bad beer to weird beer to chocolate beer (don’t ask). In between we tended to default to bottles of Czerwony Smok, as a way of resetting the palate to a stable and non-hysterical state. Czerwony Smok, from the well-known and non-controversial Fortuna brewery, is a safe bet we’ve all known for a long time. We’ve known it for so long that we forgot it was a valid contender for Beer of the Month. I’m glad we remembered, otherwise I might have been forced to tell you about the Estonian cider.